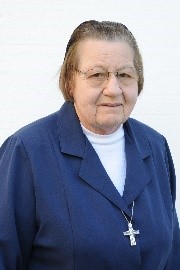 “How blessed are those who dwell in your house! They are ever praising you!” Psalm 84,5

Melania Leduvina was the fifth of the eight children born to Jose and Regina Muraro. Her parents were devout Catholics who bequeathed traditional Christian values to their children.

While still very young, Melania answered the Lord´s call to live her Baptism in a more radical way by joining a religious congregation. Upon entering the novitiate of the Sisters of Notre Dame, on February 12, 1948, she received the name Sister Maria Irena, a name she kept throughout her life. Years later, her sister Natalina Domenica also joined the ND Congregation.

From a young age, Sister Maria Irena dreamed of taking care of people, of dedicating herself to easing the suffering of the sick, especially the most neglected. She began her nursing ministry as a second-year novice, working in the hospital´s X-Ray department and in the Pharmacy. Sister eventually qualified first as a Pharmacy Assistant and later as a Nursing Technician.

Sister Maria Irena also had a high practical sense. She was responsible, had a sharp eye for peoples’ needs and offered support and comfort to the suffering and sick. In the various hospitals, she was called “the mother of the poor” due to the care she provided to everyone, but especially to the poor and needy. As a nurse, Sister was very caring! She was sensitive to the pain of others, always seeking to offer comfort to the patient. She entrusted her ministry to God from whom she drew strength and illumination for a good performance in her mission.

Sister was also an excellent administrator. For many years, Sister Maria Irena served as a local superior, and for several years supervised the students’ internship as part of the Nursing Technician course at Colégio Maria Auxiliadora.

In October 1995 Sister was transferred to Rome, to the Sacred Heart of Jesus Province, to care for the elderly and sick Sisters. In July 1999 she returned to Brazil. The following year, Sister Maria Irena joined the community of Recanto Aparecida, assisting in the care for the sick Sisters, as well as monitoring their medication. Beginning in 2011, due to age and illness, she occupied herself with small community duties, visiting the bedridden sisters and praying with them.

Sister was always diligent in community prayers, Holy Mass, and adoration of the Blessed Sacrament. She often spent time alone and in silence in the Chapel or in the small oratory. Certainly, she entrusted herself to the provident love of the good God and to dear Mother Mary.

Until her admission to Divine Providence Hospital, Porto Alegre, on August 27, Sister Maria Irena was still able to take part in formation gatherings, community prayer and recreation. In the evening, before retiring to her room, she always went to chapel in her wheelchair to say good night to Jesus.

Now, Sister Maria Irena, after a long period of suffering, rests in peace and in full vision, together with Jesus and Mary, whom she loved in her journey through this world.