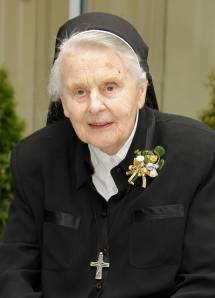 Sister Maria Editha was born in Varel, County Friesland, and she remained a real native of Friesland all her life: rooted in faith she had clear views and stamina. With her two siblings she grew up in the ecumenically oriented atmosphere of her parental home where she learnt to respect the faith and mindsets of others. Also later in life, she was interested in and open to people of Jewish faith or of Muslim belief.

During her schooldays and her further education, she experienced the consequences of the Nazi regime: The catholic basic primary and secondary school which she attended was closed in 1938; so she had to change schools. In 1944, she had to finish school early to fulfill her labor service obligation. In her realistic and energetic manner, after the war she completed all the steps that were necessary to successfully pass her teaching exam.

Since she wanted to become a religious sister, she applied for the job as a teacher at the school of the Sisters of Notre Dame in Mülhausen. There she taught for some months until she entered our Congregation in Ahlen in 1950. After her first profession in 1953, she taught Religion and German at different schools of the Congregation in Lohne, Nottuln, Cloppenburg, Wilhelmshaven and Büren and finally, from 1971 to 1990, at St. Michael’s high school in Ahlen.

Sister M. Editha was very popular with students, parents, colleagues and people outside the school. Because of her positive attitude she was open and welcoming towards others and with her sense of humor she was often able to take the edge off a tense situation. She saw when help was needed and lent a helping hand. In the course of the years, many friendships developed. They continued even when Sister Maria Editha was transferred to Kloster Annenthal in July 2014. This step was not easy for her, but her resolute and sober attitude as well as her faith helped her to overcome her homesickness for Ahlen and to get used to the new situation. It is true what an old friend of hers said: Sister Editha was able to obey and to adjust to new situations and still remain true to herself.

Now she has given her final response to God’s invitation, which Alfred Delp formulates in the following way: “God wants to celebrate encounter with us – he wants our adoring, loving answer”.