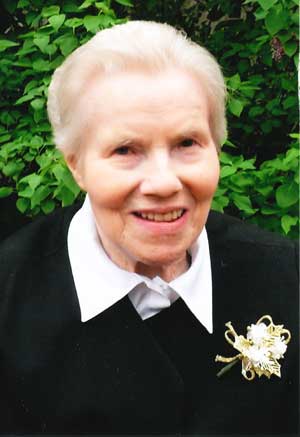 “A strong woman, who will find her?” At first sight, only few will regard Sr. Hedwig Maria as belonging to the strong women. Her journey through life has not been sensational or marked by great success. Her greatness was rather to be faithful in ordinary, often inconspicuous services. She did what she was supposed to do, even if it was far beyond her strength.

Hedwig Eilers was born in Börgerwald, Emsland, on November 18, 1922. Her father, who had returned from French captivity only late after the end of the First World War, tried to provide a living for his growing family by establishing a shop that sold linen, clothing and food. But the consequences of the world economic crisis severely hit even the inhabitants of rural areas. Like many others, Mr. Eilers, too, became unemployed. He accepted any kind of work, even if it was only for a limited period of time. So the mother became more and more the center of the growing family. She had to be an economical housekeeper, with ten children needing her affection. Naturally, the older children had to help with the housework. Hedwig learnt from her mother to run the household in an economical way. But her mother’s deep piety and wisdom of life were most important to the children.

After completing basic primary and secondary school, Hedwig could immediately put into practice what she had learnt from her mother. At the age of 15, she worked on a neighboring farm and soon became a useful help for the farmer’s wife. She also looked after the three children in the famer’s family. For almost 10 years, she readily did this work in a friendly and skillful way, though it sometimes seemed to exceed her strength. That was especially the case when the farmer was drafted into the army and was killed in the Second World War. Now the farmer’s wife and Hedwig had to do all the work on the farm and in the fields: “A strong woman“, as it says in the Bible.

Only reluctantly did the farmer’s wife give her a year off from work when Hedwig wanted to gain more skills in cooking and housekeeping in the children’s home in Wachtendonk on the Lower Rhine. During her time at that home run by our congregation, Hedwig recognized her vocation for religious life. On July 1, 1949, she started her postulancy together with her younger sister Johanna in the convent of Mülhausen. Soon the deeply rooted piety which characterized Sr. Hedwig’s religious life was recognized.

Her friendly and discreet manners, her reliability and her willingness to help were good preconditions for the ministries that were entrusted to her during the following years. She served in different fields of housekeeping and she worked with the sick and the elderly. She also showed good qualities in leadership. Sisters and employees appreciated and trusted her because of her calm, kind, and unobtrusive way.

Since about 1995, Sister Hedwig Maria felt that her strength was failing. She needed to give up beloved ministries. She became lonelier and sometimes she experienced life as a dark burden. It must have been a special grace for her when heaven opened on 28 December and – released from all earthly misery – she could finally be with Him whom her heart had belonged to in happy and in less happy days and whom she had served as a “strong woman” all her life.