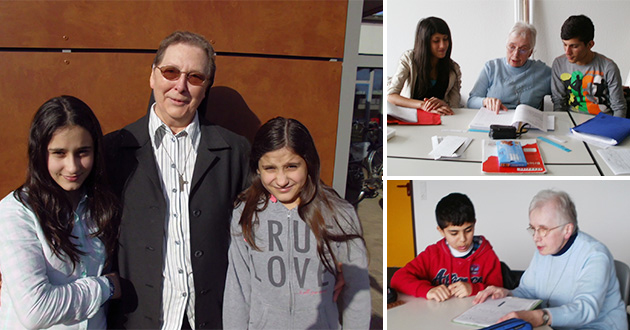 Since World War II, there has not been seen worldwide as many refugees as in the last two years.  Many come to us in Germany and, in particular, to Vechta.

More than thirty people from the civil war in Syria and from North Africa access the care at  Langförden Refugee Assistance.  Langförden is a neighboring town of Vechta.

Jesus was not a man who learned to escape hardship and deprivation, violence and persecution.  He has also approached us in Marienhain. and we have opened the door for him. We support the Langfördener group as best we can morally, and with financial and human resources.

Before Christmas there was a fundraising “chocolate Nicholas action.”  With other volunteers, Schwester M. Aloisa and Schwester M. Helma sold Santa Claus chocolate in front of the Langfördener church. The proceeds of this action went to the refugee aid of Langförden.

Great need exists regarding learning the German language. Three days a week Schwester M. Helma teaches two Albanian girls in German and Schwester M. Waltraud tutors three Syrian refugee children. This instruction is a challenge, but it is a real pleasure. The Syrian children came to Germany in September 2014 and have already learned much.

Just before Christmas two small parcels were delivered to Marienhain.  Inside was a little star cake and Christmas greetings in Albanian, Arabic and German.  We were touched and deeply moved.  That was really our best Christmas present!!