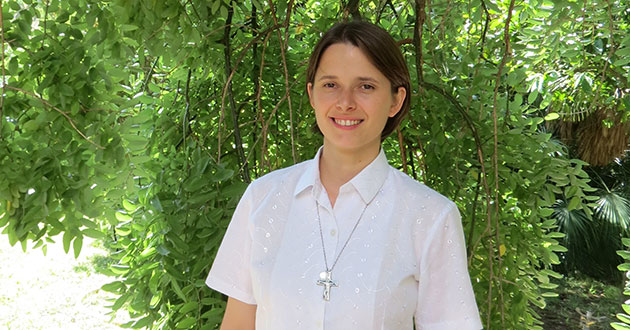 Sister Deisi Maria Naibo from the Canoas Province, Brazil, has completed her two and a half year studies of spirituality and theology at the Angelicum in Rome, Italy. On August 14, 2014, she was given a farewell blessing by the community.

The sisters at the Motherhouse thanked her for her joyful and life giving spirit. Sr. Deisi Maria was grateful to be part of the international community and to be in the center of the church to participate in some of the historical events of the church such as the opening of the Year of Faith, the Inaugural Mass of Pope Francis as well as the canonization of the two Pope Saints: Pope John XXIII and Pope John Paul II. The assistance of Sister Maria Josefa with the English language and the fact that she followed the courses at the Angelicum in English helped her to become more confident in using this language.

At the end of her time in Rome she was able to be the guide to the Brazilian sisters during their pilgrimage in Rome as well as their translator in Germany before she returned to Brazil with them on August 15.

2
SHARES
Share on FacebookShare on Twitter
News from the international novitiate in the Philippines
Holy Spirit Delegation–Tanzania/Kenya: August Newsletter Volume 6 #2