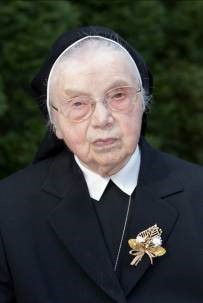 This expressive verse from psalm 139 accompanied Sr. M. Reinholde and was the foundation of her life.
Anna had six brothers and two sisters. Her older sister Ida died as a baby and her brother Josef was killed in Russia in 1942. She grew up in a family and village that were marked by the Christian faith. Anna attended the basic primary and secondary school in Höltinghausen and then the vocational school in Cloppenburg, as was usual at that time. In such a big family, help was necessary and for 7 years she assisted her parents with the work in the house, the garden, and the fields. Then she was employed in the household of Mr. Bagge, a teacher in Tenstedt near Oldenburg, for two years.

In 1949, she became an apprentice cook at our boarding school in Cloppenburg and in 1950, she entered our Congregation in Ahlen. She received the name Sister Maria Reinholde. Her sister Agnes, our Sister Maria Burkharda, had already entered in Mülhausen in 1949.

After her religious formation, Sr. M. Reinholde ministered in different places like Wangerooge and Wilhelmshaven at the North Sea, Oldenburg and Bocholt. She did different (household) activities, e.g. in the kitchen, the laundry, the sewing room, the refectory, and the chapel. In our house in Oldenburg she also took care of the elderly ladies who lived there.

In 2013, she moved to the infirmary in Marienhain, where Sr. M. Burkharda also lived, and she enjoyed her well-deserved retirement. Now the two sisters, who were very different, lived in the same community. After a short time, Sr. M. Reinholde showed increasing signs of dementia but she continued to be amiable and friendly. We could often find her in our chapel. She was often the first in the morning and the last at night to silently sit there and pray. She seemed to be deeply immersed in her motto:

“Lord, you know my heart; with you I feel safe“!

She felt safe and at home with God, especially in our Mother-Julie-Chapel. When we had to inform her about the sudden death of her natural sister, Sr. M. Burkharda, in 2017, she said, “She was at the end of her strength and now she is at home with God”.

In September 2017, Sister Maria Reinholde needed to move again, namely to Coesfeld, Salus. After a short time, she felt at home and was at ease also there.

Now God has completed her life and we are grateful for her presence among us. We believe that she is now united with her big family and that they enjoy the fullness of life in God.