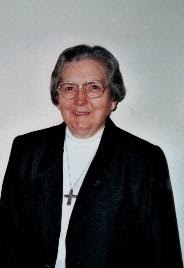 Anna Maria Weschenfelder was the third of the twelve children of Affonso and Catharina Maldaner Weschenfelder. Theirs was a faithful and God-fearing family, getting their livelihood from farming. All the children attended the São Jacó School in their hometown, run by the Sisters of Notre Dame. It was there that her vocation and love for religious life was awakened. In 1949, she entered the Novitiate and received the name Sister Maria Odete. Later, her natural sister, Sister Maria Amélia, also joined the Congregation.

In 1969, Sister M. Odete was appointed novice directress. In 1970, Sister was elected the first Brazilian Provincial Superior in the turbulent times of the transitions and aggiornamento after the Second Vatican Council. Attentive listening and striving for conciliation were two of her special gifts.

In 1970, Bishop Henrique Rüth of Cruzeiro do Sul, Acre, asked for sisters to minister in the area of healthcare and education in his diocese. Sister Maria Odete, with her missionary zeal, granted his request and, in 1971, one community was established in Cruzeiro do Sul and another in Tarauacá. Many vocations emerged in the region where the sisters ministered and a flourishing formation house developed in Cruzeiro do Sul.

At the 1980 general chapter, Sister Maria Odete was elected first assistant general to Sister Maria Raphaelita and at the general chapter of 1986 to Sister Mary Joell, until 1992, when she returned to her home province. It was during Sister Maria Odete’s second term on the general council that Pope John Paul II invited religious communities to consider establishing missions in the continent of Africa. Sister Mary Joell and her council listened to this call and invited the provinces in our Congregation to consider the options. There were invitations to, Mozambique, Tanzania, and Uganda, and in response to the Pope’s plea Sisters from India went to Tanzania in 1992, Sisters from Brazil went to Mozambique in 1993, and Sisters from North America and Germany went to Uganda in 1995. Today, almost three decades later, our young sisters in Africa give us great hope.

After her two terms in General Government, Sister Maria Odete came back to Rome twice for different ministries in the Motherhouse: From 1999 to 2002 she was translator/interpreter and secretary for Brazil. During this time she contributed to the work on the revision of the Constitutions, which was brought to completion at the general chapter in 2004. And finally, Sister Mary Sujita called Sister Maria Odete to Rome again from 2009 until 2011 as local superior of the motherhouse.

Some days before Christmas she fell in her room and fractured her femur. Immediately, Sister was admitted to the Traumatology and Orthopedics Institute in Passo Fundo. Unfortunately, during the early hours of December 25, she had cardiac complications, being called home, peacefully, at 6:50 a.m. on Christmas Day. May she now intercede for all the Sisters of Notre Dame, our ministries, our missions and for more vocations. The following quote of Saint Julie applies so well to Sister M. Odete: “Oh, how good the good God is, my dear daughter! Let us exist only to prove to him forever our love and our gratitude.” (Letter 233)