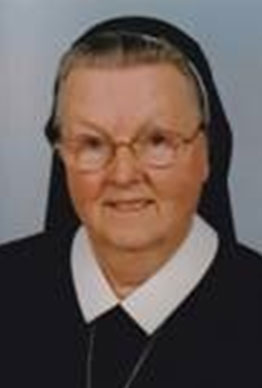 Sister Maria Michaëlla was the seventh child of Willem and Johanna Maas-Verhees. They had ten children. She was raised in Helmond where she went to elementary school and School of Domestic Science.

Her parents were working hard and gave everything for their big family. They also expected the children to help out when they were old enough. That is why her sister Toos went to the textile factory when she was 14 years of age.

Her free time was spent in the youth club, the K.J.M. where she was a good leader for the Young girls. She was also a member of the mandolin club.

Sister Maria Michaëlla got to know the Sisters of Notre Dame in Helmond. She was 21 when she entered in Tegelen.

After her profession, she worked in four different houses of the Congregation for several years, and she did all kinds of work.

In 1951 she came back to Tegelen and was put in charge of a group of children in the St. Antonius boarding school. She worked here till her strength declined. Then she still continued with smaller chores.

Sister Maria Michaëlla saw her life as a gift of God. Her life was characterized by joy, simplicity, love, and faith. She was straight forward and did not look for the person. She enjoyed small things in life and loved music and singing. Her nature was very quiet, relaxed and she had a good sense of humor.

She was involved in her own, quiet way. She also related to her co-sisters and the children in a very soft manner.

She passed on Gods Gifts: her true faith and her joyful trust in God.

In the morning of the 10th of June, she returned her gift, the gift of life, to God. She has used her talents in her own ways. Just like the famous song:“I did it my way”.