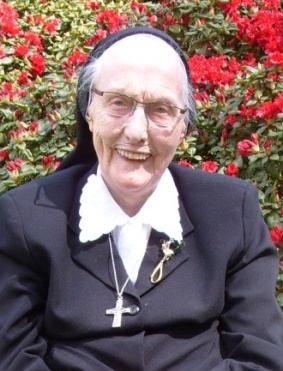 On August 11, 2016, when Sr. M. Anselma reached 100 years of age, we heard these words from psalm 90 in the festive Eucharist. She was a little bit proud that she had surpassed these words of the psalmist; with great joy and gratitude she enjoyed the day and the harmonious gathering.

Josefa Kestermann was the daughter of Antonia and Bernard Kestermann. She grew up in Leer in Westphalia together with two brothers and one sister. Her father was killed in Flanders in 1917 during the First World War, and her brother August has been missing in Stalingrad since 1943. This sorrow overshadowed Josefa’s childhood and youth. As a boarder she attended the Liebfrauenschule in Vechta and passed her Abitur there.

She felt called to become a Sister of Notre Dame and entered in Mülhausen on August 28, 1937. From 1940 – 1941, she was trained as a nurse in Cologne. Then she worked for three years in the military hospital in Mülhausen. In October 1944, Sister Maria Anselma was transferred to the island of Wangerooge in the North Sea. She remained there until her transfer to Marienhain in 2007. She always served in nursing; for some time she was also the local superior.

On April 25, 1945, she had to experience the darkest day in the history of the island when 6000 bombs fell on the island, leaving ashes and rubble and 300 dead people. Four of our sisters were among the victims. Being a young nurse in such a situation was a special challenge.

From 1945 – 1986, there was a small hospital in Haus Meeresstern, and Sister Maria Anselma was the manager. All the inhabitants of the island as well as the spa guests who were sick or had had accidents could get emergency medical treatment there. She also served as midwife. In addition, she accompanied many people during the last phase of their lives.

The inhabitants of the island lovingly called her “the angel of Wangerooge.” This name shows how dedicated she was and how much the people appreciated her. In 1980, she received the Federal Cross of Merit.

Sister remained a nurse until the last years of her life. When she herself was sick, she also wanted to be informed in a detailed way.

“For everything there is a season and a time for every matter under heaven“. (Eccles. 3: 1-2). The time of her life was 100 years, and now God has given her “a time to die.“ We believe that this time was the entry into a life to the full in God’s eternal embrace.

We are grateful for the long and rich life of Sister Maria Anselma. It has enriched our community as well as the lives of many people.