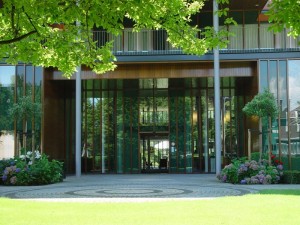 Expelled from Prussia in Germany during the Kulturkampf in the 1870s, various groups of Sisters of Notre Dame found temporary hospitality with other religious congregations or in other residences in the Netherlands until those who could travel sailed to the United States. The first Notre Dame convent in the Netherlands was established in Wessem in 1877, where sisters not transferred to the United States could live. The community grew as postulants were accepted. In 1881 the novitiate was moved to Vechta in Oldenburg, Germany. In an effort to train teachers for Germany, a teacher training college was opened at Tegelen, but was forced to close when Prussian officials refused to allow teachers trained abroad to take the teacher exams. The Tegelen college students were transferred to Vechta and the former college became an orphanage. In 1925 Tegelen became the provincial centre for the Netherlands province and in 2012 it became a Delegation. Today sisters minister in Limburg and in Noord Brabant.

The Delegation celebrates December 8th, the Feast of the Immaculate Conception, as its Patronal Feast.