Sister Maria Julie, JPIC coordinator for the Korean Province, has been working at the Gwangju Human Rights Peace Foundation as an educational program coordinator since February 2012. Gwangju Human Rights Peace Foundation was established in 2010 to commemorate the May 18th GwangJu Democratic Uprising* and to express gratitude and provide support to all those who collaborate in promoting human rights and other social movements in keeping with the social teaching of the Church.

Sister is also involved in movements such as the anti-Four Major Rivers Restoration Project and the movement against the construction of a U.S. naval base on Jeju Island.

* Gwanju Democratic Uprising: referring to the Gwangju Massacre of May 18, 1980, in which over 200 students were killed by army forces suppressing a pro-democracy demonstration. Gwangju is considered to have been at the forefront of the democracy movement in South Korea.

Some information about the anti-Four Major Rivers Restoration Project:

and the movement against the construction of a U.S. naval base on Jeju Island

(Includes historical background about the island as well as the current situation): 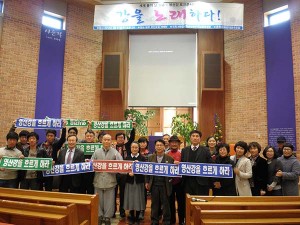 Sr. Maria Julie in a meeting for anti-Four Major Rivers Restoration Project with a Buddhist monk and activists 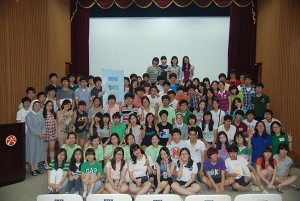