Helping to Open the Doors of Opportunity 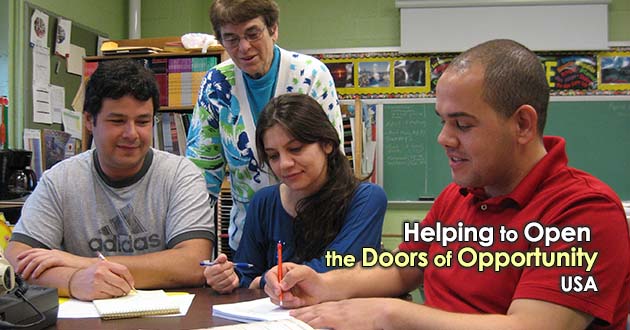 Learning a second language is not usually an easy task.  Teaching English as a second language (ESL) is a ministry that several U.S. Sisters of Notre Dame have been involved in for many years.  People who come to the USA from other countries are eager to communicate in English and seek instruction to improve their English. 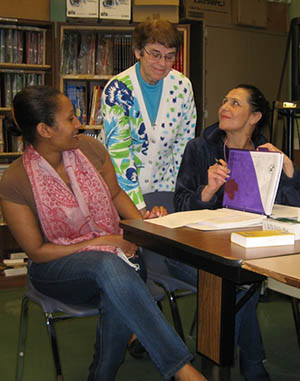 Sister Mary Marcia Kiser teaches ESOL (English Speakers of Other Languages) as part of the Ohio state- funded Adult Basic Literacy Education (ABLE) program offered through Owens Community College. Being a reading specialist and a teacher of ESL for ten years in the Maumee (city in Ohio) school system qualified her to be an ABLE teacher and substitute.

Though adults taking the course are strongly encouraged to know two other languages, the first day for each is still complicated! “There is so much information to gather upon registration, and even though the students are bilingual, we have trouble communicating because I do not speak their languages! Everyone helps everyone,” laughed Sister Mary Marcia.

The course usually runs from August until June and each adult is tested to determine the level of English they know.   Sister says that students can choose to focus on speaking and listening or reading and writing. Most choose speaking and listening. Students also take five field trips so they can learn about our community. 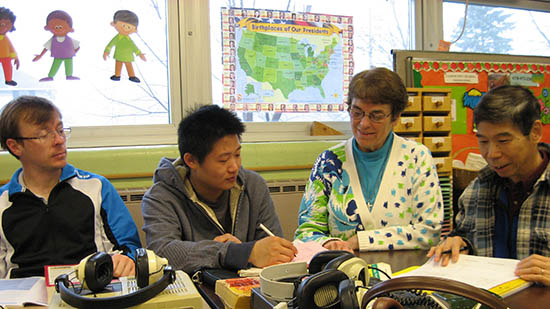 “Every person has their story about why they are in the USA.  To become a citizen one must live here for five years, have $1,200 ($800 is for fingerprinting) for the process, and go to the Cleveland immigration office with the required paperwork.

“I have found my students to be delightful, determined, and friendly towards each other; several soon socialize outside of class. I like to teach and enjoy teaching our language. “Broken English” can be charming at times because, when speaking, they get right to the point,” Sister Marcia said with a smile. “I also like learning about their countries and their cultures. I also learned some of their fears when students said they would not be in class last November on Election Day, especially since our class meets in one of the polling places. The students feared violence on voting day because electing a President in their countries can be so volatile. They pictured a military presence.”

“These people are very interested in patriotism and showing gratitude to America.  Learning the Star Spangled Banner right away seems important. They come here to give their children a better life, like most parents would do. They are very vigilant toward dictatorships.  While they feel their governments have failed them, they love and miss the beauty of their countries.

They are mostly here because of the pain and suffering experienced at the hands of their government,” she continued. “The class has a family-like atmosphere because the students become friends and support one another. It’s nice to be a part of that,” Sister Mary Marcia concluded. 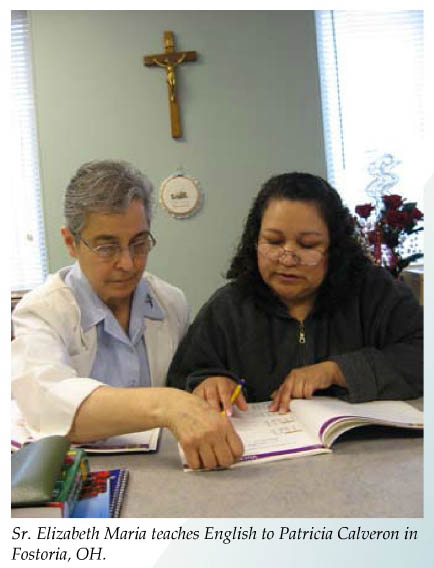 Sister Elizabeth Maria Garcia welcomes Spanish-speaking immigrants to English classes that she teaches as part of her role as the Pastoral Assistant in Hispanic Ministry at St. Wendelin Parish in Fostoria, Ohio. She has been ministering in Fostoria for three years. She also offers translation assistance when people need help with a doctor visit or on other occasions.

Two mornings a week her English class meets; a night class will begin soon for those who work during the day. “Watching videos helps participants learn pronunciation by repeating words and also helps them learn to read English words.  We also practice dialogue in workbooks so they can learn conversational English which is used in daily life,” Sister Elizabeth Maria said.

English class student Patricia Calveron has lived in the U.S. since 2001 and says she likes to learn more English because it is better for her family. “I like to listen and pronounce words correctly. I also like the homework because it helps me learn more. I am so glad to have this class,” Patricia explained.

Sister Elizabeth Maria said, “I was a teacher for 25 years, and got away from my Spanish for many years. But I always wanted to work with my people (Latin immigrants). Now that I am teaching English, my Spanish speaking students are helping me improve my Spanish. They are my greatest teachers!”

Sister JoAnn Maria Torti who has been teaching English as a second language since 2004 through St. Wendelin, also helps with legal documentation for immigrants in Northwest Ohio.  Sister JoAnn Maria is a certified representative of the Bureau of Immigration Appeal (BIA).

Since 2005 she has helped many clients with family-based immigration such as adjustment of status, citizenship, family petitions, work permits and assistance with individual tax ID numbers.

The Department of Homeland Security requires all documents such as birth certificates to be translated into English and to be notarized. Sister is also involved with Deferred Action for Child Arrivals (DACA). “In this capacity I am helping young people who were brought to the U.S. as children, and are now between 15 and 31 years old and need to apply for work permits, drivers licenses and naturalization,” Sister JoAnn Maria said. “This process protects them from deportation from the U.S. which is usually the only home they have ever known. We are helping to keep families together and treat people with dignity,” she added. 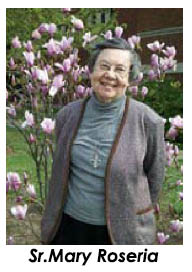 Sister Mary Roseria Helmkamp provides a welcoming presence in the St. Philomena Deanery in Sandusky and Ottawa counties of Ohio.  There are 30 migrant camps in those two counties. “When migrants come to our area they are helped with food, clothing, worship services, Mass and confessions,” said Sister Mary Roseria.

Local Hispanics also give sister leads of people who need help, as do agencies like Job & Family Services of Ohio.  She mostly works in a social or pastoral capacity and interacts with agencies, writing food pantry slips and getting other basic supplies when migrants arrive in the area.

2
SHARES
Share on FacebookShare on Twitter
For the Restoration of the Human Rights of the Poor, Incheon, South Korea
Bring in Used Shoes and Purses!