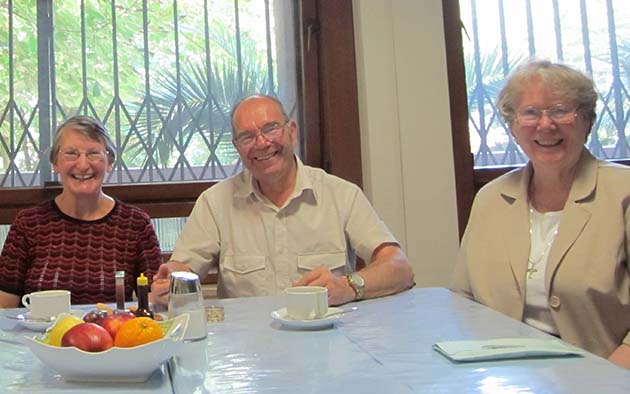 On July 13, 2013, the sisters in the motherhouse community enjoyed the visit of Mr. Eddie Woodmore and his wife Vivien from Bath, Somerset, England. Mr. Woodmore had three aunts in our Congregation. They were natural sisters of his German mother and all three entered in Mülhausen.

Sister Maria Ansgar was the first one to join us in 1925. In 1933, she was transferred to England, where she studied in Birmingham and London and ministered at our schools in Hoddesdon and Kettering. Studying natural sciences, she wrote her thesis “On Plant Ecology and Colonization of Waste Lands”. In the 1940s, she was already onto a very “modern” topic. After 40 years in England, she was called back to Germany, but another adventure in a foreign land awaited her when she was asked to come to the generalate in Rome to assist with the writing of the yearbooks of the Congregation as well as translation, which she did from 1985 to 1987, when she returned to Mülhausen, where she died in 1988.

Her sisters Maria Tarcisius and Maria Aurelia entered some years later, in 1931. Sister Maria Tarcisius was sent to Brazil as a temporary professed sister and ministered in the province of Passo Fundo until she died of cancer in 1972. With her older sister Maria Amsgar, Sister Maria Aurelia went to England in 1933, but returned a year later to be trained as a nurse. With much dedication, she ministered to the sick for the rest of her active life. She died in Mülhausen in 2010 at the age of 100.

Their sister Paula met her husband, Mr. Woodmore, (Eddie’s father) in Germany and eventually moved to England with the family. Eddie and his wife were on vacation in Italy and asked if it would be possible to come and visit the motherhouse, where one of Eddie’s aunts had lived. The Woodmores were happy to see our house and some photos of Eddie’s three aunts from our archives and receive copies of their obituaries which he will share with his relatives in Germany. Thank you for coming, Eddie and Vivien. It was a delightful visit!