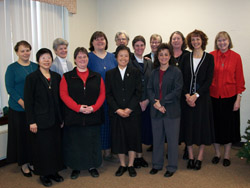 At least once each year, the Sisters in initial formation and the formators in the four United States provinces come together for a national gathering. This year, the gathering was held at the Provincial Center in Covington from December 31, 2010 – January 2, 2011. Sister Betty Finn, SC was invited to facilitate the weekend on the topic of “Building a Better Community by Being a Better Community Member.” Sister explored with the group the personal responsibility each member of the community bears in developing communication skills, recognizing and honoring differences, and contributing to the good of the whole.

Along with large and small group sessions with the facilitator, there was also the opportunity to celebrate New Year’s Eve with the Sisters of the Covington Province and experience their hospitality. An important part of the weekend was time for socializing and renewing relationships. This annual meeting also provided the formators the forum to discuss formation issues and plan for future gatherings. The weekend concluded with a special prayer service during which names were drawn for a particular prayer partner during the coming year.