The gift of New Leadership! 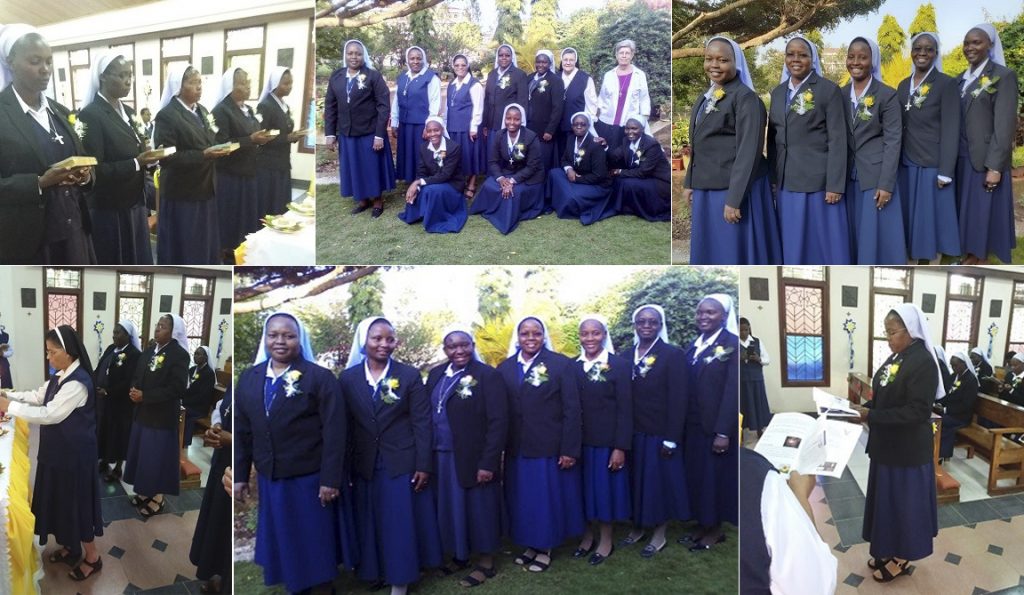 The installation of the new leadership team on May 22, 2021 was an historical event in our Holy Spirit General Delegation. The installation took place during a prayer service led by Sisters Mary Rashmi and Mary Pascalia Ndunge in the chapel at our Notre Dame Convent, Arusha, Tanzania.  The prayer service was so inspiring and gave everyone present a chance to participate.

In the beginning of the prayer service, Sister Mary Roshini and the outgoing team were recognized and thanked for all they had accomplished during their years of leadership. They were given a candle symbolizing their total self-gift to the Congregation and expressing gratitude and love from the Sisters in the Delegation.

Afterwards, Sister Mary Christine was called to the altar and asked if she was ready to serve the delegation.  Her “yes” was a firm confirmation. The Delegation Councilors were then invited to the front and asked if they were willing to serve the delegation as advisers and assistants and willing supports to Sister Mary Christine, to which they responded, “yes”. All the Sisters present also promised to support Sister Mary Christine and her councilors. The gifts given to the new Delegation Superior and her councilors was a beautiful candle and a Bible as symbols of their special calling to leadership. The service continued with meditative songs and petitions. The theme of the day was, “I will be with you! Be firm…be steadfast…you will succeed.” Everything was well done!

Following the prayer service was supper and a program of congratulations as well as entertainment by the candidates, novices, and the Sisters.  Many thanks were given to the Sisters who were on the planning committee for this program. The prayer service, decorations, meals and entertainment programs were beautifully done! There was a real spirit of joy in all present!

In her address, Sister Mary Christine, the new delegation superior, thanked all the sisters for their contributions toward the successful day of Installation and very specially thanked the outgoing team for their dedicated service. Due to the pandemic, many of our sisters could not attend the function. However, it is good that all the communities were represented by one or two sisters.  We have so much to be grateful for in our new leadership team. We move forward now in renewing the face of the earth and cultivating a culture of encounter and caring.