Commemorating the Independence Day of Indonesia 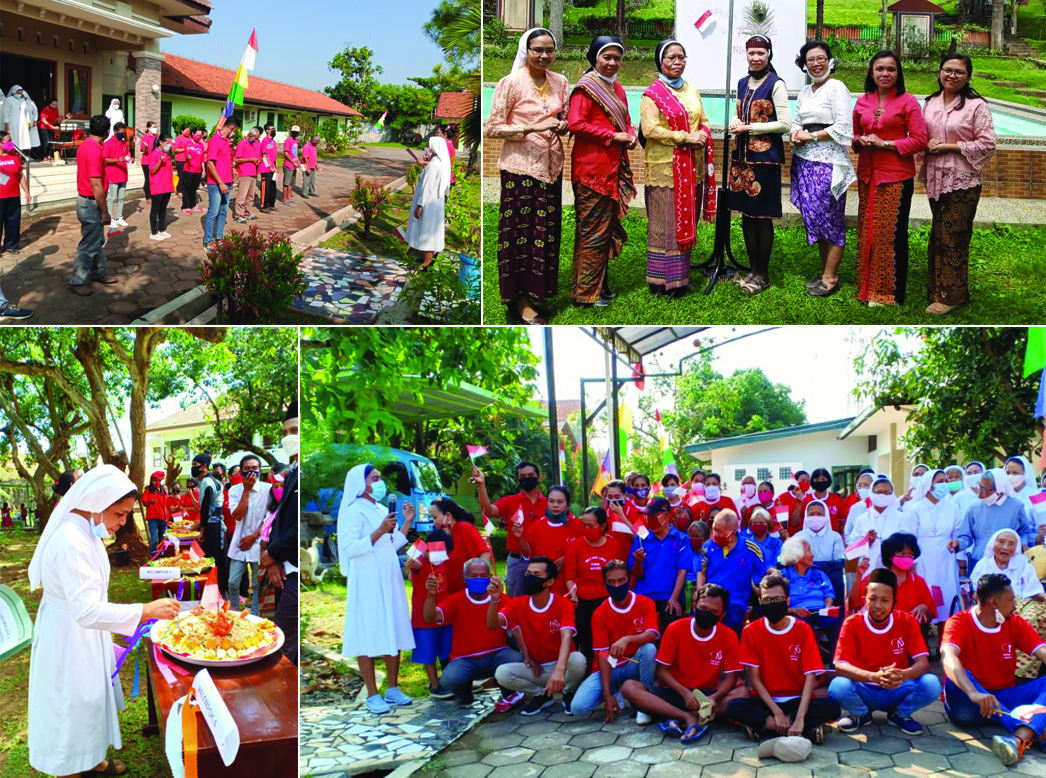 Every year on August 17, Indonesian people celebrate their anniversary of independence. One month earlier, Indonesians in neighborhood associations, villages, sub-districts, and at regency levels up to the capital city, participate in celebrating independence with various activities, culminating in a flag ceremony on August 17. However, this year, at the 75th anniversary of the Republic of Indonesia, the situation was very much different from previous years due to the COVID-19 pandemic, which has not ended yet. Consequently, all the ceremonies and activities were carried out very simply and without the typical public display, both in the palace and in other communities and institutions.

This important event was also shared by the Sisters of Notre Dame. Some SND groups celebrated Independence Day in very simple but joyful ways in their communities, some are participated in live streaming ceremonies, and some celebrated with employees.

One of the communities that held a flag ceremony was the Pekalongan Motherhouse community, where the sisters celebrated the Independence Anniversary with their employees. The flag ceremony started at 7:30 a.m. in the front yard of the sisters, with Sister Maria Robertin, local superior of Pekalongan Motherhouse, as the leader of the ceremony. In her speech, sister appealed to all employees to experience the joy of liberating and respecting each other. “We as one family and one motherland work together for mutual progress,” she said. After the flag ceremony, the festivities continued with games and competitions: putting a scissors into a bottle, a fried rice cooking contest, and a fashion show featuring heroes of the Republic of Indonesia’s Independence. In this contest, the employees were divided into four groups, and several sisters were asked to be judges. The series of activities above was published by Sr. M. Olivia through her article on the SND Indonesia website.

Besides the Pekalongan Motherhouse community, the sisters also held a similar activity at the Santa Maria Tawangmangu Retreat House. The sisters and employees held a flag ceremony wearing attire from their respective regions, including Javanese, Kalimantan, Betawi, and NTT clothing. The garments displayed a love for the richness of Indonesian culture which, although diverse, is still united based on Pancasila and Bhineka Tunggal Ika. After the ceremony, the celebration included performing arts programs from several regions, namely, dances from Kalimantan and NTT. These were followed by a cracker-eating contest and playing volleyball with water balloons in the swimming pool, making the atmosphere even more excited. The activity on August 17 closed with a lunch of grilled fish caught from our pond.

All activities ran smoothly, and all experienced the joy of independence, even though the activities were carried out following health protocols. All participants were required to wear masks and keep their distance for mutual safety. Our one hope is that Indonesia can quickly become free from the COVID-19 pandemic. Our motto: “I am Indonesian, I am Free.”

0
SHARES
Share on FacebookShare on Twitter
On our patronal feast, the Queenship of the Blessed Virgin Mary, we thanked the Mother of God for her protection during the pandemic
Three Future Formators completed SND formation Course in Rome