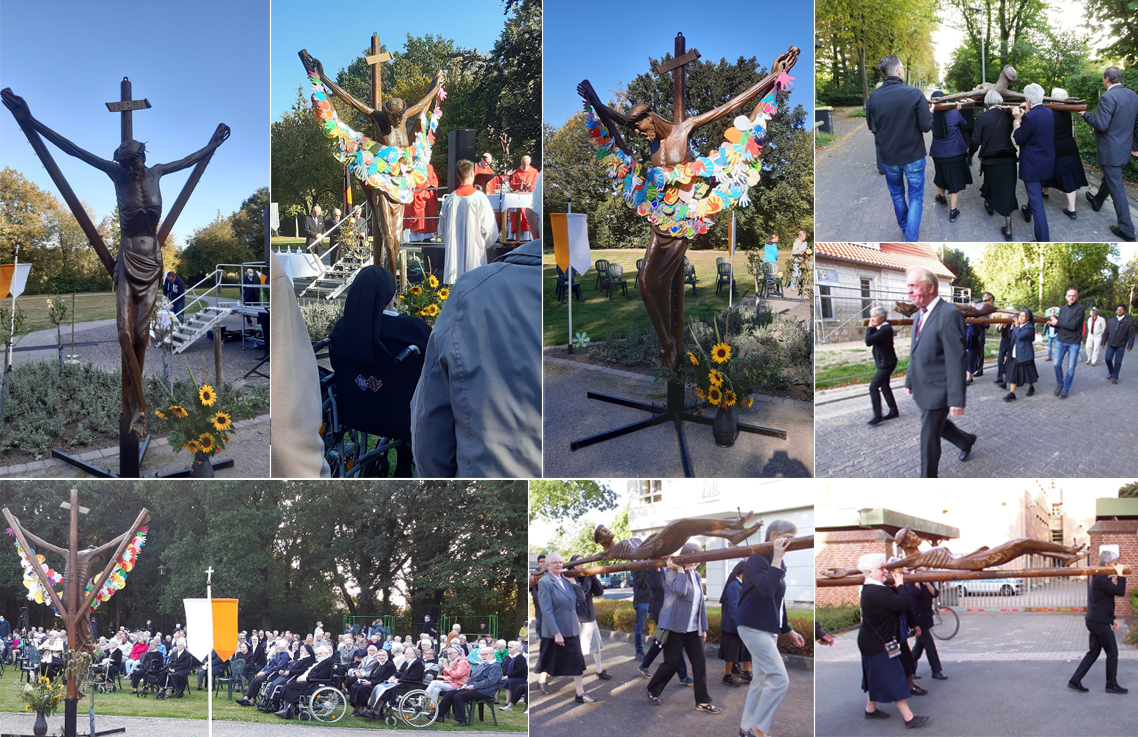 Traditionally, every year on the Sunday after the feast of the Exaltation of the Holy Cross, the Coesfeld Crucifix is carried in a procession along the stations outside the city of Coesfeld. This year, the procession was not possible due to the Corona Pandemic.

Instead, Holy Mass was celebrated in the garden of Kloster Annenthal. To the delight of the sisters, the people in charge in the parish made this decision, remembering that on October 1, 2020, the Congregation of the Sisters of Notre Dame would celebrate the 170th anniversary of its foundation. In this way, the Coesfeld Crucifix came to the Sisters of Notre Dame for the first time in history.

As no processions were allowed, a small group of people carried the Crucifix through the city from St. Lamberti Church, and ten Sisters of Notre Dame in two groups had the honor of being allowed to carry it for the last part of the journey to the garden of Kloster Annenthal. There it was set up in a prominent place for the celebration of the Holy Mass in which more than 300 parishioners and sisters participated.

During the celebration of Mass, the crucifix was adorned with paper hands on which the kindergarten-children from St. Lamberti-parish had written the names of people for whom they wished to pray. The Sisters of Notre Dame present certainly added all the sisters throughout the world and all those who had asked them for their prayerful remembrance.

Because of the restrictions due to the pandemic, Prof. Dr. Daniel Bogner, professor for moral theology and ethics in Fribourg, Switzerland, who was going to offer reflections on the topic of this year’s program “You for me,” could not be present but had recorded his thoughts, and those in attendance were able to watch his meaningful and engaging contribution on a big screen that had been set up.

At the end of the Mass, the blessing was given with a small crucifix which contains what is said to be a relic of the true cross which was formerly enclosed in a special compartment in the Coesfeld Crucifix. All agreed that this occasion was a beautiful gift from God to the sisters as the Congregation approaches the celebration of the 170th anniversary of its foundation.