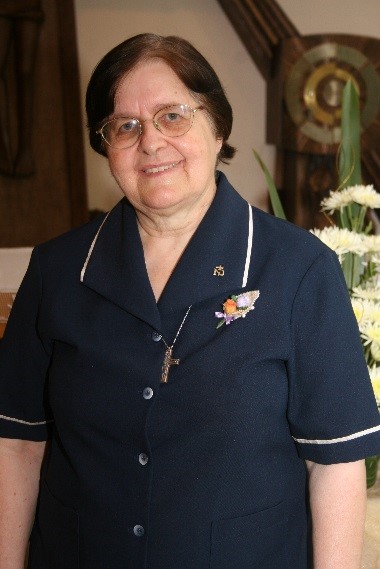 In the evening of December 29, 2015, Sister Sybilla Maria was freed from suffering. The Lord of life called her to eternal fullness. Psalm 130, verse 5 reads “My whole being hopes in the Lord”. Sister Sybilla Maria lived hopeful of being freed from the cancer that had progressed in recent years. God had prepared His chosen one over the years of suffering; during the last few weeks, she gave back her life to the loving hands of God the Father.

Sister Sybilla Maria was born on May 11, 1929, in Dona Francisca, county of Cachoeira do Sul. Her parents, Vergilio Monego and Ângela de David Monego had 10 children, Sybilla being the firstborn. In 1947, she entered the Novitiate of the Sisters of Notre Dame. In 1948, in the second year of the novitiate, she began her mission as an educator. She dedicated herself to education until 1990. She was an excellent teacher of the Portuguese language. She was a dreamer, creative, romantic; she liked poetry and prose. She nurtured lasting friendships. On significant dates, both liturgical and civic, she sent messages from her writings to the Sisters, to friends and to acquaintances.

When she gave up teaching, she dedicated herself to the correction of texts and to preparing the report of Colégio Santa Teresinha, Taquara, as well as writing the Annals of the house. She did all of this with accuracy, responsibility and caring. She worked at Colégio Santa Teresinha for the last 46 years. She left that community only when the disease had advanced to such an extent that she needed special care. She was reluctant to leave and go to Recanto Aparecida, Canoas, which offered greater services, however she nurtured the hope of returning to Taquara.

She loved working in the parish and occupied herself with writing novenas, which she prepared with dedication and care for the Feast of the Divine Holy Spirit. On her spiritual journey, she nurtured special devotion to Our Lady and participated regularly in the sacrament of confession. In community life, she was reserved and gentle in her words. She liked to recount and share her stories and experiences. She dedicated special love for her family; she visited them as much as she could and was concerned about everyone.

In 2007, Sister Sybilla Maria, stricken with cancer, underwent surgeries. She feared the consequences of chemotherapy, refusing to submit to it. She believed that she could beat the disease without chemotherapy. She began treatment late. Some days before her death, she said “I am in this situation because I did not accept treatment, but I don´t blame anybody for the situation in which I am”. Then she surrendered her life.

When she realized the seriousness of her illness, she asked for the anointing of the sick. Some hours before her death, she received the visit of a priest who comforted her with a blessing. May the Lord of life reward her for all the good she did during her passage through this world. Faith tells us that Sister Sybilla Maria enjoys eternal happiness.