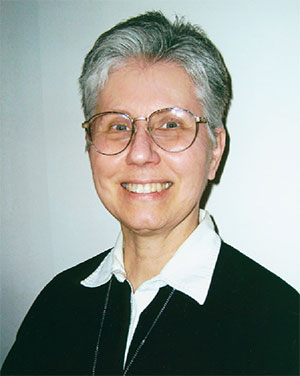 “Do whatever He tells you.”

Meribeth was the oldest of the three girls born to Florence (Strah) and Edward Rome and spent her childhood in a home where strong, lasting family bonds were nurtured. She was always proud of and appreciated her Slovenian heritage—it was an integral part of her life.

After attending St. Vitus Elementary School, Meribeth requested admittance to Notre Dame Academy as an aspirant, thus beginning her journey to become a sister, a desire since second grade. As a senior, she entered the Sisters of Notre Dame and at investment received the name Sister Mary Cupertino. Her devotion to St. Joseph Cupertino, begun in high school, deepened and flourished throughout her life.

Sister Mary Cupertino (later changed to Sister Meribeth) received a bachelor’s degree from Notre Dame College, South Euclid; a master’s degree from Xavier University, Cincinnati; and certification as a Pastoral Minister for the Diocese of Cleveland, Ohio. Whether as a primary teacher, preparing hundreds of children for the sacraments, or as Director of Religious Education, Sister Meribeth had a passion for education. She was a clever, creative teacher. Her love for God, life and learning motivated and inspired students of all ages to build up the good that was sometimes hidden within each heart. “Education is important to their own future and to the future of those around them. They have to believe they are able to contribute something to the world they live in.”

Sister Meribeth was a “people-person” who maintained connections with people throughout the years and reached out as a friend to those she encountered each day. Her ability to relate to others, her warm smile, joy and wit, her interest, compassion and prayer drew others into a large circle where Christ’s unconditional love was present.

After the recent diagnosis of pancreatic cancer, Sister Meribeth’s personal relationship with God, knowing that she was intimately loved and cared for, brought courage and peace. She has often echoed the words of St. Julie: “In whatever way He comes, God is always welcome.” As she has now been welcomed into heaven, may she rejoice, and rest, in God’s loving arms.