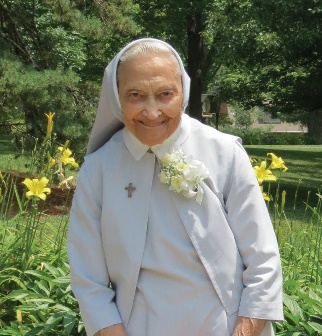 Grace was the youngest of five children born into the loving family of Walter and Cecilia Kammer. She characterized her childhood as a very blessed and enjoyable time. She attended St. Martin of Tours School and Notre Dame Academy, from which she graduated on June 6, 1944. After high school Grace worked at Second National Bank for five years. However, she felt drawn and inspired by her sister, Sr. Mary Clotille, to join the Sisters of Notre Dame. She entered in 1950, making her first profession of vows in 1952.

Sister Mary Walter Ann began her ministry as a teacher. On Saturdays and during the summers, she attended Edgecliff College in Cincinnati, from which she graduated in 1969. Sister earned her Master of Education from Xavier University in 1982. Her teaching in the primary grades extended over thirty years in the Archdiocese of Cincinnati and the Diocese of Covington until she retired from the classroom in 1987.

Sister’s ministry did not stop after teaching. She helped with food preparation at the Provincial Center and other local communities until 1999. Along the way, she provided others much pleasure with her homemade cookies and cakes. Sister then moved to Holy Spirit Convent in Newport, Kentucky, where she worked at the Parish Food Pantry. She spent many hours listening to and helping the poor, distributing food, and raising funds to help those less fortunate. In June of 2017 Sister once again retired, moving to Lourdes Hall Care Center where she continued her good works. In particular, she kept adding to the hundreds of cards and notes she sent for various occasions to sisters, family, and friends. Her messages, beautifully hand-written, typically ended with the words “Be good to yourself!”

On July 17, 2019 Sister Mary Walter Ann went home to God very peacefully – surrounded by her loving family, sisters, and friends. Sister was preceded in death by her parents, her brothers, Walter and Joseph, and her sisters, Sister Mary Clotille, SND, and Rosemary Kammer. Sister leaves behind her beloved nieces, grand-nieces, and grand-nephews. She will be most fondly remembered by her dear friend Sister Mary Judith Niewahner, SND.

Visitation was held from 9-10 on July 20, 2019 at the Provincial Center, followed by the Mass of Christian Burial. Interment in the convent cemetery followed the Liturgy.

Sister Mary Walter Ann will be remembered for her captivating smile, her genuine heart, and her passion to help the poor. May the love with which Sr. M. Walter Ann served her God give her eternal happiness with him forever!