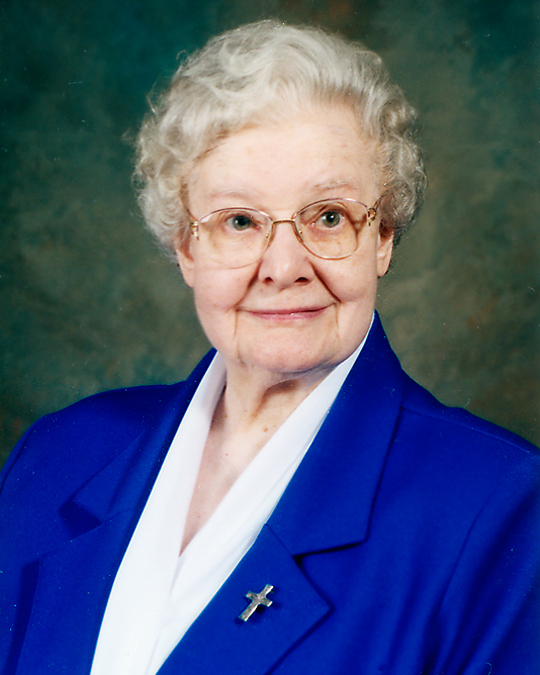 Thelma was the second oldest of the three children born to Albert and Florence (nee Alten) Conrad. When she was just three, her mother died of diptheria. Her father married again but her new mother, Louise, died after only eight months. Two years later, Mr. Conrad married Veronica (sister of Louise) and a new baby sister, Louise Ann, was added to the family. Thelma always remarked that God had given her three wonderful caring and loving mothers! The family lived in Sheffield, Ohio, and were members of St. Teresa Parish. Thelma loved the days of her youth: playing, working and praying with her close-knit family. In her sophomore year of high school, she came to live as an aspirant with the Sisters of Notre Dame. She entered the novitiate February 2, 1938 and graduated from Notre Dame Academy, Cleveland, in June. At investment, she received the name Sister Mary St. Martha.

Sister Mary St. Martha once reflected that she was always able to look back and see God’s hand in all of her life. As a novice, she began her studies to become an elementary school teacher—her dream. However, because of a great need, Sister was asked to change and prepare for teaching high school home economics. This proved to be one of her greatest blessings. In 1971 Sister was again asked to make a change to join the Notre Dame College, South Euclid, Ohio, staff to be an assistant professor of nutrition and dietetics.She was well prepared for this ministry having a bachelor’s degree from Notre Dame College and a master’s degree from Western Reserve University, Cleveland. Both degrees were in Home Economics. Sister once remarked, “Teaching is my life!” To each of her students Sister Mary St. Martha ministered with great expertise, a welcoming spirit and a compassionate heart. In her later years at the College, Sister volunteered in the Advancement Office and served as alumnae moderator.

When Sister moved to the Provinical Center in 2004, prayer became her priority. Along with being a master cross-stitch artist, a calculating opponent in a card game and an accomplished organist, her generosity, sense of humor and kindness made her approachable and comfortable to be with. She was an ardent fan of the Cleveland baseball team and always had a story to tell or a list to memorize to keep her mind sharp. After being diagnosed with cancer, Sister continued to live and treasure each day as a gift and a blessing. She welcomed God’s loving, abiding presence in whatever form it was revealed. Sister Mary St. Martha was a reflective woman, always faithful to the life to which she knew God had called her and led her. May she rejoice and delight in the embrace of our good and provident God for all eternity.