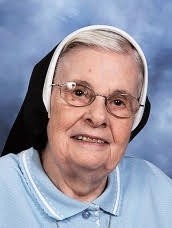 Sister Mary Marjorie was the first child of George and Margaret Laseke Gasdorf, who raised two children, Rose Ann and her younger brother, Lincoln.  Another brother, George, died at birth. She described her childhood as very happy, made so by very loving parents.

Rose Ann attended St. Thomas School, Ft. Thomas, Kentucky, and graduated from Notre Dame Academy in 1945. In high school she felt called to be a nurse. As soon as she graduated from Good Samaritan School of Nursing in July 1948, she began working at St. Joseph Infant Home and absolutely loved it.

At Notre Dame Academy Rose Ann also felt drawn to religious life.  On her twenty-second birthday, she entered the Sisters of Notre Dame instead of either of the other congregations she had had as teachers.  Interestingly, their ministries included hospitals while, at that time, the SND’s did not.  Providence rewarded sister’s trust; after her first profession, the Covington province opened a hospital in Lynch, Kentucky.  Sister Marjorie was one of the pioneers there.

Both in Lynch and later at St. Claire Hospital in Morehead, Kentucky, Sister continued in pediatric care.  She experienced sheer delight when she presented a mom with her newborn—all cleaned up and wrapped in a warm receiving blanket.  At St. Charles Care Center, Sister M. Marjorie gave years of special loving care to a hydrocephalic child, earning her parents’ enduring gratitude.

In subsequent years, she served in parish convents as nurse and cook. She liked to try new recipes and used her decorating skill in the dining room and chapel. Next, she continued her ministry at Lourdes Hall Care Center, assisting with medicines, and later in the Apostolate of Prayer. Along with her matter-of-fact-ness, Sister M. Marjorie had a good sense of humor.  At her first meal as a patient in the health care center, an aide asked what sister wanted for dessert.  With a twinkle in her eye, sister replied, “A hot fudge sundae, please.”  The community shared a hearty laugh while sister settled good-naturedly for pudding.

After over forty years of compassionate ministry as a nurse, Sister Mary Marjorie went home to God very peacefully, surrounded by her loving sisters.

Sister is preceded in death by her parents and her brothers, George and Lincoln Gasdorf. She is survived by her niece, Lisa Gonzalez, of Hebron, Kentucky, and her nephew, Gregory Gasdorf, of Orlando, Florida.