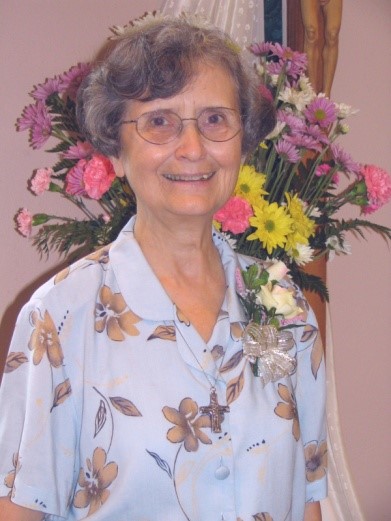 After a long declining illness Sister Mary Elisbeth Ruffing was received into the arms of a loving God on the morning of September 21. Born the eldest of eight children, Donna June learned early in family life how to share and how to care with compassion for others. Later on in life these virtues must have made community living much easier for her. Those well acquainted with Donna knew her to be also a responsible, dependable person possessing the gifts of integrity and creativity.

After Sister Mary Elisbeth’s teaching career in several secondary schools, she ministered as Associate Pastor or Pastoral Minister and was as dearly loved in those positions as she was in the classroom. In both positions she was treasured for her gentleness and empathy.

She possessed a delicate refinement and sometimes appeared to be somewhat eccentric, a characteristic which endeared her to others all the more.

Sister Mary Elisbeth’s love for the beauty of words transcended classroom walls. Besides in her ordinary conversations with sisters, family, friends, those to whom she ministered in the parishes also observed this. She was skilled at writing parodies to catchy melodies as well.

She had a deep affection for our founding story. She spent two years in Rome helping to write a number of volumes that recorded our congregational history.

The last years of Sister Mary Elisbeth’s life were marked by silent suffering. Even as physical disability and loss of memory took its toll on her, she never lost her gentle sweetness or her sense of humor.

One of the songs for which Sister Mary Elisbeth wrote new words was entitled, “Mary, Virgin of Beginnings.” Now Mary is showing Sister Elisbeth into heavenly new beginnings, where, with the Trinity, she will spend forever and ever. May she intercede for us for this same grace.