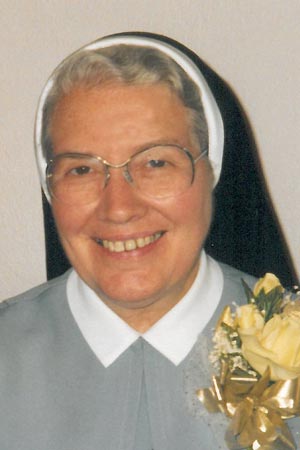 Charlotte Hemmerle belonged to a large family having four sisters and five brothers.  As the oldest daughter, Charlotte helped her mother with the cleaning and loved to care for her brothers and sisters.  So she was often referred to as the “little old grandmother.”  She attended St. Therese Elementary School and the Academy of Notre Dame of Providence in Newport. Following graduation from high school, she entered Villa Madonna College to work for a degree in elementary education because of her love for children.  She was drawn to the Sisters of Notre Dame through visiting her aunt who was in that community.  Sister Mary Caroline entered the convent in 1944, and professed her vows on August 13, 1947. A great joy for Sister Mary Caroline was the entrance of her younger sister, Imelda, Sister Mary Margaret Agnes, in 1951.

After entering the convent Sister’s college major was changed to high school science. She held degrees in secondary education in math and the sciences. Although she would have preferred to work with younger children, she accepted the ministry assigned to her. This ministry “forced me to depend upon God and to live in Faith that He would sustain me – and He did.” For thirty-five years she taught at Notre Dame Academy in one or several of these fields: chemistry, biology, health, math and/or religion. Sister made a deep impression on a number of her students, who still inquire about her years later. One student who became a life-long friend stated that “her greatest lessons were not the ones she (Sister) taught from the books; no her greatest lessons were the ones we learned by just watching her daily actions as she went about loving and serving the Lord!“

While teaching at NDA, Sister performed the ministry of local superior for six years. These years were followed by six more as local superior at the Covington Provincial House.  Her goal was to live a life of prayer and to help the sisters as best she could.  For many years Sister Mary Caroline’s natural sister was an adoration sister at the congregational center in Rome.  In 1998, Sister Mary Caroline was privileged to join Sister Mary Margaret Agnes at the Motherhouse as an adoration sister for 2 years.

In the later years of her life, God asked a final surrender of Sister Mary Caroline.  Upon learning that she had Alzheimer’s Disease, Sister said that she wasn’t really afraid because even though this illness may cause her to forget who God is…she knew that He would never forget her. She expressed her trust in the following way.  “Sometimes God needs to take things away from you and empty you out so to speak so that there is more room to fill you up with His Love.” Sister Mary Caroline was truly full of God’s love and brought it to all who were in contact with her: family, sisters, nurses, and friends.

May she now be in the presence of the God who never forgot her.