“Come to me, all you who labor and are overburdened,
and I will give you rest.” Matt 11,28 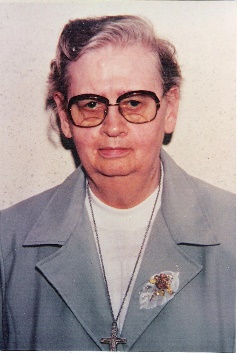 These words of St. Matthew were confirmed in the life of Sr. Maria Valeria, who was called to receive the reward for the faithful fulfillment of her mission as a Sister of Notre Dame.

Jesus’ invitation “Come to me” sounded in the ears of Sister Maria Valeria on the morning of August 04, 2016. The merciful and good heart of God the Father surely accompanied her long years of suffering.

Maria Valeria was the daughter of farmers who made their living from working with the earth. She is the 10th of the 17 children of Leonardo Rauber and his wife Augusta Selbach. God graced the Rauber family with two religious daughters of the Sisters of Notre Dame Community, Maria Valeria and Maria Hilga (Sister Maria Giselda, who died on January 28, 2004).

In the second year of the novitiate in 1942, Sister Maria Valeria began her mission taking care of sick people. Sister worked as a dedicated nurse until 1972. Due to health problems, sister left her work in the hospital and came to the Provincial House Community for treatments. From 1973 to 1991 sister was a member of different communities where she devoted herself to handcrafts with special skill. For a few years she worked as a teacher and then helped in sewing and making beautiful tatting lace for the altar cloths.

In 1991 Sister Maria Valeria was transferred to Recanto Aparecida because her physical and mental health required more care. During these years the cross of loneliness was her companion. In Hosea 2:14, we read: “I will take her to the desert and speak tenderly to her heart.” We believe that the nearly 20 years that she was confined to bed were years of purification and brought her closer the God of Life.

Devotion to Mary was very present in her life. She expressed it through songs and images of Our Lady which had privileged spaces in her room.

In the long period of her illness, Sister Maria Valeria received all the dedication and care of the sisters and the Recanto Aparecida nursing professionals.

Rooted in the faith that sustained the journey of Sister Maria Valeria, we believe that she is our intercessor with the good God.