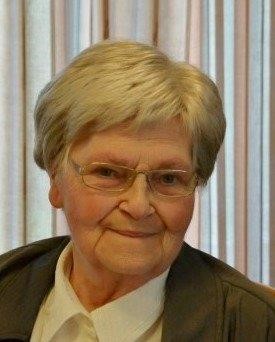 The supreme law that determines our life in the following of Christ is that of charity.
Constitutions Art. 98

In the early morning of 19th May, Sister Maria Theresitha went home to God after a fruitful life full of love and friendship.

Nobody understood the words from our Constitutions quoted above better than her.

In the many years of her religious life, she accepted more and more the offer of her Lord and Creator to live only for Him and her fellow human beings. She knew how to care for all those whom she met.

She was the youngest child in the family of Peter Jozef Franssen and Maria Francisca Mohr, which consisted of the parents and 10 children, five boys and five girls.

She was born in Slenaken where her parents had a farm. Soon she moved to Wijlre where she attended elementary school. At the age of 12, she became a boarder with the Sisters of Notre Dame in Heerlen and graduated from basic elementary and secondary school in 1950.

After her retirement, she was appointed local superior in Maria Auxiliatrix and, in 1983, in Weert. In Weert, she was also active in the parish, e.g. as a catechist.

When the house in Weert was closed, she came to Tegelen where she spent her twilight years.

Sister Maria Theresitha was very serious and dutiful, but she also had a good sense of humor. She could entertain a hall full of people and make them laugh.

Now she has reached the feast of completion. May the Lord, who knows all her good works, be her rich reward.