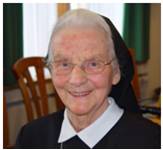 Sister Maria Margarita was the sixth of the seven children of Gottfried Heinrich Vossen (Dutch citizen by birth) and Maria Rickfelder (German).

She spent her youth in Dortmund, where she attended elementary and middle school. For further education, she attended the schools for home economics in Maria Auxiliatrix and Maria Helferin. Later she completed a training as a nursery-school teacher and worked for one year at a kindergarten in Dortmund.

In 1936, Maria Vossen entered the congregation of the Sisters of Notre Dame in Mülhausen. A year later, she was invested and received the nameSister Maria Margarita.

In the second year of her novitiate, she was transferred to Tegelen since she had the Dutch citizenship. She then took her first profession in Tegelen and attended the teacher training college of the Sisters of Divine Providence. Unfortunately, she had to stop this training due to illness.

After her recovery, she became the local superior in Lauradorp and during that term of office, she received the Dutch diplomas A and B as a nursery-school teacher. For several years, she worked in a kindergarten. She was then entrusted with the leadership of the novitiate. Her living faith and her firmness helped many young sisters on their way to God. She was an example for the sisters regarding punctuality and faithful fulfillment of one’s duties. She practically lived what she taught her postulants and novices.

The life of Sister Maria Margarita was marked by punctuality, dedication and faithfulness to God and with his help also to her fellow men, especially her co-sisters and relatives.

We thank God for having had her among us for so many years and we ask him to reward her richly for her continued readiness to lovingly serve God, the Church and the congregation.