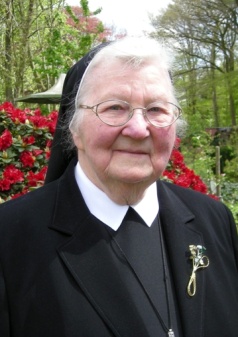 This inner certainty that God always watched over her and that she could always trust in Him accompanied and supported Sister Maria Ludgard through all her life.

Maria Ravert was the fourth of 10 children. She had 6 brothers and 3 sisters. Her parents, Maria and Bernhard Ravert, were farmers. Maria and her siblings spent their childhood on their parental farm.

During the first years after completing school, Maria helped on her parents’ farm and then she came to a family with five little children. The farmer was in the war. She liked her job and loved the children. Responding to the wish of her parents, she left the family after only one year and three months to learn housekeeping. On another farm, she helped with all kinds of work. After seven months, she unexpectedly got a job as an assistant cook at the boarding school in Cloppenburg through the mediation of an SVD priest. In Cloppenburg, she came to know our sisters and recognized that she, too, was called to religious life.

Her eldest sister Elisabeth had entered the Clarist Congregation in Kevelaer and died there in 2007. Maria entered in Mülhausen and received the name Sister Maria Ludgard. After her novitiate, her religious life held a variety of responsibilities for her. From 1951 to 1967, she served in the kitchens of different institutions.

From 1967 – 1968, she completed her training in housekeeping in Paderborn and then ministered again in the kitchen, the refectory and the garden until 1986.

Then she was entrusted with pastoral care. She was sent to visit the elderly people at Hedwigstift, a home for senior citizens opposite Marienhain, and to accompany them during the last years of their lives. She fulfilled this new ministry with great commitment.

We still hear people in town asking repeatedly, “How is Sister. M. Ludgard? Years ago she took such loving care of my mother, my father… at the Hedwigstift”. As long as she could she visited people there and also at House Teresa, another home for senior citizens run by the same organization.

Until some months ago, she went to House Teresa at least once a week to visit the residents and to pray the rosary with them. When she returned she would tell us how much the elderly people had enjoyed praying the rosary together and meeting her.

Because of her trust in the Good Shepherd, she could always be there for others, especially for the residents in the nursing home, and accompany them wherever the way might lead.

About two weeks ago, the doctor sent her to the hospital in Vechta to have her health checked. She hardly spoke any more but as soon as the conversation was about her release from the hospital, she declared in a surprisingly clear way, “I want to go home”.