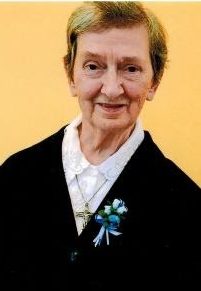 “When Jesus rose early on the first day of the week, he appeared first to Mary Magdalene. She went and told those who had been with him”! Mk 16:9-10

These verses from Mark’s Gospel may well be applied to Sister Maria Liliane, who left this life in the early hours of the Saturday within the Octave of Easter and joined the resurrected ones!
Zaldira Stefanelo Librelotto was born on October 15, 1936, in Sede Vitória, a municipality of Cruz Alta. She was the sixth of 14 children. Her parents, Jorge and Cecília Stefanelo Librelotto were farmers. She received the Sacraments of Christian Initiation at the Nossa Senhora de Lourdes Parish in Ibirubá.
Zaldira met the Sisters of Notre Dame in Ibirubá, where she participated in religious celebrations and attended elementary school. It was there that her vocation to religious life was awakened. At the age of 17, she became a postulant in the Congregation of the Sisters of Notre Dame and, at investment, received the name Sister Maria Liliane, a name she carried for her entire life. Besides Sister M. Liliane, two of her sisters entered the Congregation: Sr. M. Josema, who passed away on December 5, 2017; and Sr. M. Líria, who lives at Casa Betânia.
Following her First Profession, she began her ministry in education and, at the same time, continued her studies at Maria Auxiliadora School, Canoas. Sister’s next assignment was as a teacher and secretary at Júlio de Castilhos School. In 1965 she became principal for the Teacher Training Program in Passo Fundo. She also received her degree in the Natural Sciences, with a specialization in mathematics. For the next 30 years Sister M. Liliane dedicated herself to education as a math teacher in the states of Rio Grande do Sul, Rio de Janeiro, São Paulo and Brasília, DF. Many sisters who were her students have fond memories of her pedagogy and teaching methods.
Sister Maria Liliane was also engaged in catechesis and liturgy, especially after the innovations of the Second Vatican Council. As the parish director for Catechesis, she made sure that the children did not miss their lessons. Because she was joyful and creative herself, her students followed her suggestions. Devotion to Mary and to the Eucharist were also an integral part of her consecrated religious life.
Beginning in 1986, Sister’s health was compromised by several situations. As a result, she started a program of intensive therapy in hopes of finding a cure. For this reason, Sister lived in communities which offered conditions that allowed her to interact with people and at the same time engage in small household chores. Since 2009, she had been part of the Casa Betânia community.
In the past two months, Sister M. Liliane was diagnosed with a rampant liver cancer that took her strength and enthusiasm away. During her final illness, she was well cared for by her co-sisters and nursing staff. In the last week, in a low voice and uninterruptedly, Sister prayed: “Holy Mary, Mother of God, pray for us sinners, now and at the hour of our death. Amen”! On Saturday morning, April 10, at 2 a.m., her heart stopped beating and, as she wished, “Holy Mary assisted her at the hour of her death,” and now Sister M. Liliane enjoys the Resurrection, after having concluded the Easter Week with her own surrender to God.