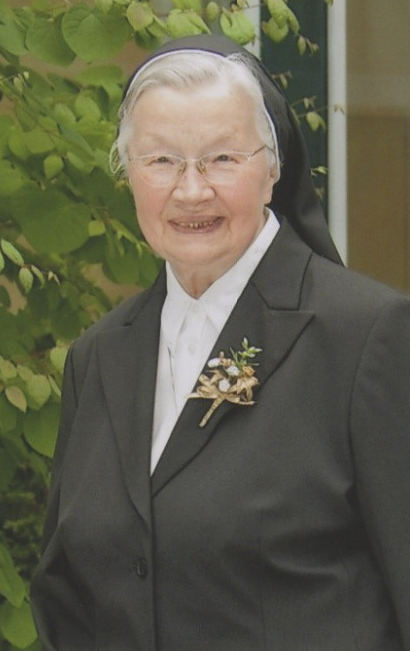 These words have marked her. When we consider her different ministries, it becomes obvious how much she has made herself available to HIS mission and to that of our Congregation.

Sister Maria Irmtraud grew up with her 6 siblings in a religious family. First, she attended the high school in Vechta until the eleventh grade. Her teacher of religion confirmed that she had always participated in religious education classes with great interest and had performed very well. In 1951, she entered our Congregation in Ahlen where the novitiate was at that time.

In 1952, she obtained the “Missio Canonica“. In the Congregation, she was given the opportunity to complete her studies and to receive the qualification to teach at elementary and secondary schools. In 1974, she received the teaching qualification for religious education in special schools, elementary and secondary schools and in middle schools. Sister Maria Irmtraud has always loved working with young people and proclaiming the faith.

During her first years in the convent, she assisted in the boarding school in Vechta and later she herself became in charge of groups in Vechta and in Ahlen. After completing her studies at the teacher training college, she did her trainee year at our Notre Dame School in Berlin where she stayed for further five years. Then she came to our school in Ahlen. After her retirement from school, she went on ministering in five different houses. In 2019, she came to Kloster Annenthal where she spent her well-deserved retirement. Here, too, she was still interested in news from the church, the Congregation and world politics. First, she was very committed to our oldest sister whose eyesight was deteriorating. Every day, she read the latest news to her, and she accompanied her wherever she could.

After this sister had died, Sr. Maria Irmtraud had to cope with great challenges. She lost her hearing and her eyesight more and more and she got more diseases. But her interest in our Congregation and in world affairs remained. She would often stand closely in front of the bulletin board to learn some news. Several times a week the news was read to her. When she was asked what she would like to hear, there was usually the following order: letters from home, congregation, church and then politics, especially news from the Oldenburger Land. Hearing something from her brother Albert was always a great joy, especially because she had once been allowed to visit him for several weeks in the USA. Until her death, Sister M. Irmtraud took a lively interest in all events in her family and among acquaintances and relatives. She was especially worried about a former student who lives in Berlin but does not have a family.

How much Sister M. Irmtraud would have loved to celebrate her 90th birthday in Kloster Annenthal. But since she was in hospital, the celebration was to be postponed. However, she managed to be released from hospital for one day. In the evening of her birthday she needed to return to hospital because she was not feeling well. She was able to receive our congratulations, but the postponed celebration could not take place anymore. We thank all our co-sisters and collaborators who took care of her during her serious illness; what was possible was done for her.

Now Sister Maria Irmtraud is with the one whom she has loved. May she experience eternal joy in his loving embrace.