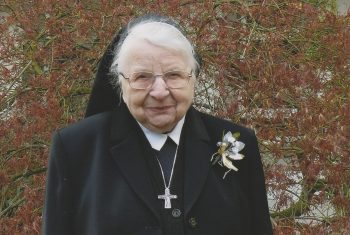 Sister Maria Igna grew up with her twin sister, Maria, and two elder siblings in the warm and secure atmosphere of her parental home. Her father, Paul Kewitsch, and her mother, Josefine, were deeply rooted in the Catholic faith and in the local parish. In spite of the difficult post-war years of the First World War and the global economic crisis connected with inflation, they managed to provide a happy childhood for their children.

At an early age, Elisabeth felt the desire to become a missionary, and after completing the basic primary and secondary school, she attended the missionary school in Mülhausen together with her friend, deceased Sr. M. Alexandra. In 1939, she passed her final exam at the Liebfrauenschule.

In the same year, she started her religious formation in Mülhausen, and when she entered the novitiate, she received the name Sister Maria Igna. Because of the turmoil of the Second World War and the post-war years, she had to delay her wish to go to the mission in Brazil, and from 1941 to 1942, she attended the commercial college in Ahlen. In 1947, she received a teacher’s degree for basic primary and secondary schools at the teacher training college in Vechta. Then she taught in Berlin and in Lohne.

In 1951, she was finally allowed to go to Brazil as a missionary. Regarding her new task, she was full of great expectation and openness. She felt a deep desire to proclaim God’s goodness to the people in South America. She had great pedagogical skills but hardly any knowledge of the Portuguese language. Her spontaneity and friendliness quickly helped her to overcome language difficulties so that she could teach in various schools until 1982.

In 1982, she returned to Mülhausen, where she was in charge of our missions until 2007. She learned about the missions on the spot and, in spite of her advanced age, she travelled to Korea, to Indonesia, and to India. However, her age did not allow her to travel to our missions in Africa. She made and maintained a lot of contacts which helped her to support the missions. In negotiations, she showed charming and effective perseverance and persistence. Her love and devotion opened many doors and hearts.

She often fell back into Portuguese, and she even spoke her German mother tongue with the soft Portuguese accent. It was always a special joy for her to meet sisters from the various countries who came to Mülhausen as pilgrims. During the last years, progressive hearing loss impaired her sociability so that her favorite place was in the chapel where she sometimes prayed loudly and sang on her own. Until her death, she maintained close contact with her nephew Leo, the son of her deceased twin sister.

In the community in Kloster Mülhausen and from 2006 in Haus Salus, she contributed in a humorous way to feasts and celebrations. On the morning of October 21, 2017, God heard her prayer and called her to her eternal dwelling place. We thank God for the missionary zeal of Sister Maria Igna, and we trust that we now have a great intercessor in heaven.