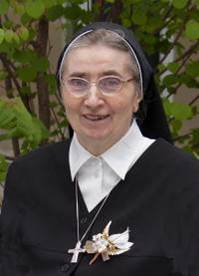 Sister Maria Hermtrud, Margarete Christine Gehring, was born in 1939 (the year when the war broke out). Margret, as she simplified her name, grew up with two brothers and two sisters in her parental home. After completing school, she helped her parents with their business for two years before becoming a so-called “Haustochter”, daughter of the house, in the family of a hotel owner. Besides appreciating her industriousness and her reliability, they praised her “sincere and happy nature“ and gave her an excellent report.

In 1958, she joined the Julia-group of the orphanage “Vinzenzwerk” in Handorf in order to “prepare” herself now especially for her “goal” as she herself wrote. Young women who were interested in religious life and at the same time wanted to work in the children’s home could join this group. A sister of Notre Dame who was working there gave them some pedagogical training and introduced them to religious life. In May 1959, Margret definitely decided to realize her “goal“ and entered our Congregation in Coesfeld. During her religious formation, she got to know different ministries of our Congregation, thus gaining the preconditions of personal and ongoing formation. First, she excelled in housekeeping, then as leader of groups in boarding-schools and in the seventies she even received the qualification to become warden of a home.

From then on she worked with only one short interruption as warden and as local superior at the hostel for women workers in Bocholt and at the boarding house for university students in Münster and in 1993, she accepted the ministry as local superior in Kloster Annenthal, our provincial center here in Coesfeld.

We all know and appreciate Sister Maria Hermtrud as a friendly, generous and patient co-sister and superior. She was always willing to help and ready for action; hardly ever was anything too much for her. She knew how to create a warm atmosphere for the sisters, to make life enjoyable for them, and to compensate for occasional stress. Coordinating the different tasks and conditions of the sisters and employees at Kloster Annenthal daily demanded her attentiveness, patience and expertise. Besides, she had to be flexible when planning and organizing extraordinary events like funerals, visits of foreign sisters, jubilees … Saying ‘no‘ never suited Sister M. Hermtrud. She would rather roll up her sleeves and help with the necessary work…

Contributing to our common spiritual life was very important to Sr. M. Hermtrud. Her personal way of living our faith and her trustful praying were very convincing. Sr. M. Hermtrud felt very connected with her family. Whenever possible she joined them on special occasions, she knew her nieces and nephews and accompanied them with interest.

The tragic death of her blood sister and the unexpected death of a co-sister from our community here at Kloster Annenthal at almost the same time were such a lasting shock for her that she could never completely recover from it. She more and more lost interest in her environment, became increasingly introverted and appeared to be deeply sad.

Even when the responsibility of leadership was taken from her, she did not regain her former love of life. With her strength failing more and more, from 2010 on she lived in one of our infirmaries where she received the necessary help. Sometimes she seemed to react with reason. Often, however, she appeared to be uncomprehending and absent-minded – but never unfriendly.

A short time before her unexpected death, a sister who had noticed her suddenly increasing weakness asked her, “Would you like to go to heaven, Sr. M. Hermtrud?“ and she answered, “Yes, I would love to!” A short time later she passed away – silently, as if in joyful expectation, she gave herself into God’s hand.

We are grateful to her. In great faithfulness she was dedicated to our community and to our mission. Now she will rest in God’s everlasting peace.