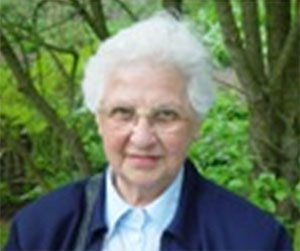 Sister Maria Geertruid grew up in a family with 4 boys and 2 girls. She was the fourth child. She was born in Helmond and lived her youth there.

After her primary school she went to a school where she learned to sew. She obtained her diplomas in lingerie and costumes.

She was one of the first girls to join the St. Claire Society. (In those days this was a well known and thriving group out of which grew a number of Sisters of Notre Dame.

After she joined the Sisters of Notre Dame, as a novice, she worked as a group leader in the Children’s Home in The Hague. She did this with much love and pleasure, especially when she was asked to take care of the very small ones. Later she talked about this ministry with a lot of warmth.

After her profession, when she completed her teacher’s training, she worked in Hoensbroek for two years, then went to Tegelen where she was a teacher and principal in the Immaculata School. She taught the youth in Tegelen for 24 years.

Sister Maria Geertruid was a perfect educator. She loved the children, got along with them and had a strong bond with them.

After her retirement she did a lot of work on the computer for others. She did it with joy.

But she also had her share of suffering. Yet despite her disease and pains she took part in community life and tried to hide her aches and pains from others.

Then one evening she had a cerebral hemorrhage. We had no idea how that would impact her. When she came back home from the hospital after just two days she was so happy that she was beaming with joy.

She wanted to go for it. But it was harder than she thought… She was no longer able to speak, express herself. She was totally dependent on others. This made her feel very powerless – and that was hard for a person who had always taken care of her own business! In the end she no longer had the strength to go on. Her energy was at its end and she longed to go to her Creator and be united with Him.