What direction your boat will take is in God’s hands. Rest in Peace. 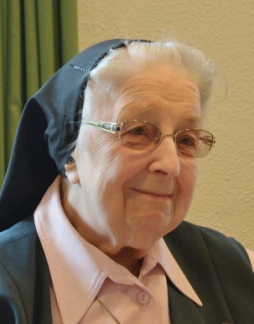 Sister Maria Frederika was the second of nine children of Wilhelmus de Vroedt and Maria Johanna Dierks. Her father was a boatman so all their children spent their first years on the ship. Sister Maria Frederika loved the boat and enjoyed life on the water. When they were old enough, the children had to leave the big, cozy family to find a job on land.

That is how Sister Maria Frederika went to the Sisters of Notre Dame in Nijmegen. All her life she shared how much she learned there. The education on the boat was not sufficient, but with the assistance of the sisters, she could further develop into an independent woman with a bright mind.

Later she took a job in the sisters’ children’s home in The Hague. She greatly loved to work with children. She sacrificed herself–nothing was ever too much. The atmosphere among the women caring for the children was quite positive. Three of them decided to join the Sisters of Notre Dame in Tegelen. That was a seed for her own vocation, and in 1949 she, too, entered the convent.

After her profession she obtained her diploma as a caretaker for children and later also as a nursing aide.

For twenty-seven years she worked with children in our houses in The Hague, Tegelen, Amsterdam, and Wassenaar. She also took care of the sick children in our Maria Auxiliatrix Sanatorium. Later she devoted herself to the care of our old and sick sisters in the health care center in Tegelen.

When she herself aged and her own strength was declining, she tended lighter household chores.  Whatever she was asked to do, she did with love, a sense of sacrifice, and humor. All her life long she stayed in touch with some of the children she had cared for. They cherished her motherly love and support as they reached adulthood.  She was so proud when she heard they were doing well in life.

We, too, will remember Sister Maria Frederika with great gratitude.  May she rest in peace.