For what more could my heart wish
than meeting you with jubilation –
you who are life and give life. (Psalm 84) 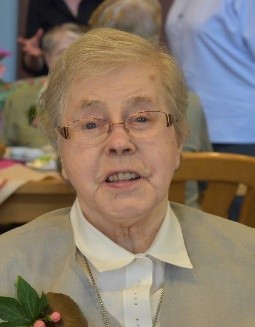 Sister Maria Elise grew up with one brother and one sister. Her youth was marked by the Second World War, which was a difficult time for the family.

They were evacuated and had to make the journey from the south to the north of the country on foot, finding food for the family along the way.

After primary education, Sister Maria Elise became a boarder at the domestic science school in Bouvigne. In Bouvigne she had an accident which permanently damaged her hearing.

After her training at the domestic science school she became an apprentice with the Sisters of Notre Dame in Tegelen.

She felt at home with the sisters and after a while her vocation matured and she wanted to become a religious herself. At the age of 21 she entered the Congregation.

After her profession she was entrusted with the laundry and other household tasks in the various houses of the province.

Life as a whole is a gift, but also a task, an opportunity to be on our way to God. Sister Maria Elise made the most of this opportunity.

Her life was marked by goodness, simplicity and honesty. As a religious she did not draw attention to herself, but she carried out the work she was asked to do modestly and with dedication. Nothing was too much trouble for her if she could help others.

During the last years her health deteriorated and the problems and discomfort of impaired hearing were hard for her to deal with.

She has now joined the feast of completion. May the Lord who has witnessed her work be her abundant reward.