“You are my Shepherd. Lord, guide me. I want to see you and listen to you.“ 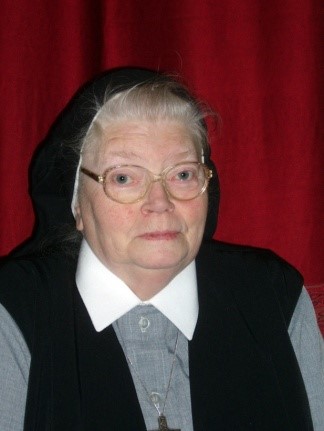 From Easter 1946 to Easter 1954, she attended the basic primary and secondary school in Darfeld. Then she continued her education at Notre Dame High School in Coesfeld, where she graduated. She then attended a college for nursery school teachers, where she passed her exam in March 1958.

In May 1958, Hildegard asked for admission into the novitiate of the Sisters of Notre Dame in Coesfeld. After her religious formation, Sr. M. Edelgard assumed the leadership in nursery schools of different parishes from 1961 to 1985. She committed herself with great energy to the well-being and the development of the children entrusted to her. Apart from her work in the kindergarten, Sister Maria Edelgard enriched life in the parish by her activities. The preparation for First Communion and Confirmation were particularly close to her heart. In order to be able to pass on consolidated knowledge of the faith, she participated in a theological and liturgical correspondence course.

After retiring from work in nursery schools because of health reasons, Sister Maria Edelgard did domestic work from 1985 to 1992.

From 1992 to 2006, she was active in various challenging areas: care for refugees at the German Red Cross, care for unaccompanied refugee children, assistance in an asylum seekers‘ center and in a hospital for handicapped people in Münster-Amelsbüren.

Since 2009, Sr. M. Edelgard lived in Kloster Annenthal. Although a little withdrawn, she was interested in what was going on in the community. She loved doing handicrafts to make the sisters happy even when her physical condition made it more and more difficult.

The last weeks were challenging for Sister M. Edelgard. She had to suffer a lot. Trusting in God, her Shepherd, she accepted her suffering. The nurses, the co-sisters, and the employees of the social service accompanied her lovingly.

May Sister Maria Edelgard now enjoy forever the fulfillment of her longing: seeing God, the Good Shepherd, face to face.