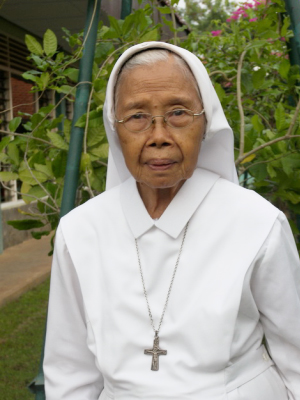 “Behold the handmaid of the Lord; be it done to me according to your word.” (Luke 1:38)

Sri Basuki was the third child of Sajid Islam Atmosubroto and Suparmi. Altogether they had two sons and three daughters. Sri and her siblings were brought up in a non-Christian family on the island of Solor, East Indonesia where her father was sent as an Indonesian soldier.

Her knowledge and love of Christianity led her to baptism in the Catholic Church on April 08, 1950 an in the same year, on May 07, she received the Sacrament of Confirmation in Yogyakarta. Sri was trained as a nurse and midwife, passed her exams, and was assigned to the Pekalongan District Hospital, which belonged to the Sisters of Notre Dame before the World War II. At this hospital Sri Basuki got acquainted with our missionary Sisters who worked there. The personal contact with them made Sri Basuki ask the Mission Superior to be accepted as an SND postulant on August 1955. The religious formation led her to say her yes to Jesus. She received the religious habit on July 14, 1956, and became Sister Maria Djibrail.

She was formed and trained by our missionary sisters to be a person of obedience, self – discipline, simple and firm in living out her religious vows. After her profession she was missioned to be a nurse and midwife till her tertianship in our Generalate and Motherhouse in Rome, where she made her final vows on July 02, 1964.

When she returned to Indonesia she continued her ministry in health care. She ministered in the Maternity Clinics in Budi Rahayu, Pekalongan and St. Theresia, Rembang. The second one was the longest time of her ministry. Her patience, friendliness and prayers made young mothers come to her to deliver their babies. They felt secure in the hands of Sister Maria Djibrail. She also got along well with doctors, co-midwifes, nurses’ assistants and other workers.

As Sister was getting weaker, she was called to Salus, Pekalongan, in 2006, where she sill did many little things and prayed a lot for the Congregation and our communities. We loved to go to her asking for prayers. And she did it gladly. Unfortunately, in 2016 she suffered stoke on her right limb and remained bedridden.

Sister’s condition changed drastically on December 25, and we rushed her to Budi Rahayu Hospital and she was admitted to intensive care. On December 29, at 03:45 in the morning, surrounded by sisters, the Lord of Life called her to be with Him in eternity. Our good and provident God released Sister Djibaril from her long suffering. May she rest in peace in the bosom of our Heavenly Father. Farewell, dear Sister Maria Djibrail, please pray for us to do God’s will as you did before.