As a deer pants for the water, so pants my soul for you, O God. My soul thirsts for God, for the living God. When shall I come and appear before God? ( Ps. 42) 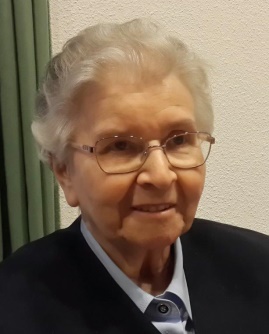 Sister Maria Christien was the fifth child of the Dutch man Fredericus Knippenborg and his wife Maria Eissing, of German nationality. She spent her youth in Coesfeld, Germany, just before and during the Second World War. These years were difficult.

When she was eight, she lost her mother, and her father was left with young children who still needed a lot of care and attention. The youngest children, Sister Maria Christien and her brother Günter, were sent to a children’s home. They did not have very good memories of their stay, they both missed their mother too much.

The father remarried and their family became even bigger. Altogether there were fourteen children.

When Sister Maria Christien became of age, she wanted to join a convent and she went to the Sisters of Notre Dame in Coesfeld. Because she had the Dutch nationality, the sisters advised her to join the Sisters in the Netherlands. That is how she ended up in Tegelen on April 5, 1955.

Right after her profession she was assigned to work in the Pilgrims House “Villa Maria Regina” in Rome.

Then she worked with the children in the boarding school in Tegelen and in the children’s home in Amsterdam. After that, she changed to care for the elderly in Amsterdam and Wessem. She did all of this with great dedication.

The last few years of her life were very difficult. Sister had a lot of pain and the doctors could not do anything about it anymore. The continuous pain made her suffer mentally also. But as a religious woman she sought help from God. She really experienced Gods loving care for her.

She did not easily express her feelings and emotions to others, but she confided in God, who ultimately gave her rest!