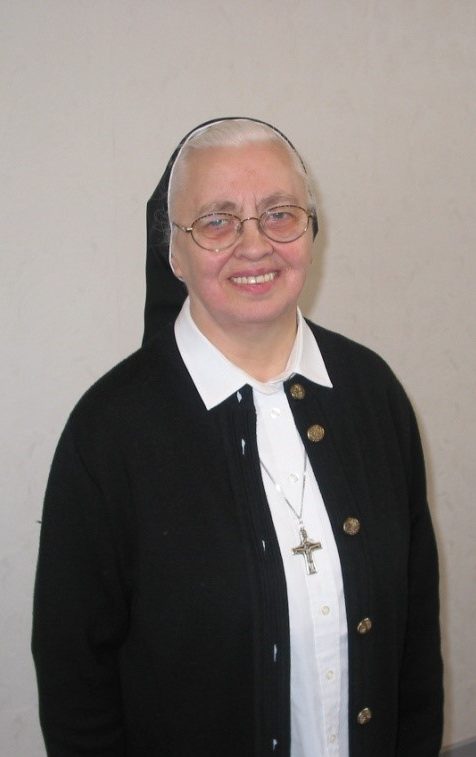 Josefa Kordes was the eighth child among 16 siblings. She had 9 brothers and 6 sisters. Two girls and one boy died as infants. Three of the later born children received their names again. In 1943, her brother Aloys was missed in Russia. Those were surely crucial events and experiences for the parents. Sister Maria Antonitis’ father was a master smith and always very busy and her mother took care of the children and the household.

Among the many siblings, two brothers became priests, one of them a Marist father, and two girls entered our Congregation.

In1936, Josefa started basic elementary and secondary school in Halen. After the 6th grade, her brother prepared her for high school in Cloppenburg, which she attended from 1942 – 1949 and from which she graduated with the Abitur. She stayed in her parental home until she entered in Mülhausen on 1st July 1949.

After her first profession in 1952, her life became very “eventful“: first, she trained as a kindergarten teacher in Münster and then she ministered in different nursery schools, especially in Westphalia.

In 1975, she was transferred to Rome, Villa Maria Regina. Many co-sisters have surely experienced her there as a lively, cheerful sister whom you could always ask for advice, especially regarding trips into town. Many young women who were trained there in the kitchen for one year or did an internship know Sister Maria Antonitis from her Roman time. She loved to accompany them into the city and to show them the wonderful churches. She had good material, city maps and bus schedules, which she was always ready to share with others.

From 1st July 2003 on, Sr. M. Antonitis belonged to the province of Vechta and in 2005, she came to the Liebfrauenhaus in Vechta. She was in charge of the refectory and she fulfilled this task with loving attention towards each sister. It was delightful that she had a “secret drawer”, e.g. for special kinds of fruit.

In 2012, she came to Marienhain and from 2014 – 2017 she was in our infirmary. In the beginning, she loved going for a walk to the convent cemetery in the evening and to remember all the sisters who are buried there.

She also discovered her love for painting mandalas, which she did with great skill and perseverance. Her very first mandalas were already excellent. Everything fit very well together. She loved having someone sit next to her who also painted so that she could have a conversation. When she came to Coesfeld in September 2017, she continued this beloved activity. Whenever she had something to offer, she loved sharing it with others. She loved tasteful and beautiful things.

Sister Maria Antonitis knew that she was held and supported by God, and being a shepherdess for others was her mission. Her deep faith, which had been nurtured in her family, has been the source of her strength throughout her life.

God has been her shepherd who has completed her life and who has called her home to be with Him forever.