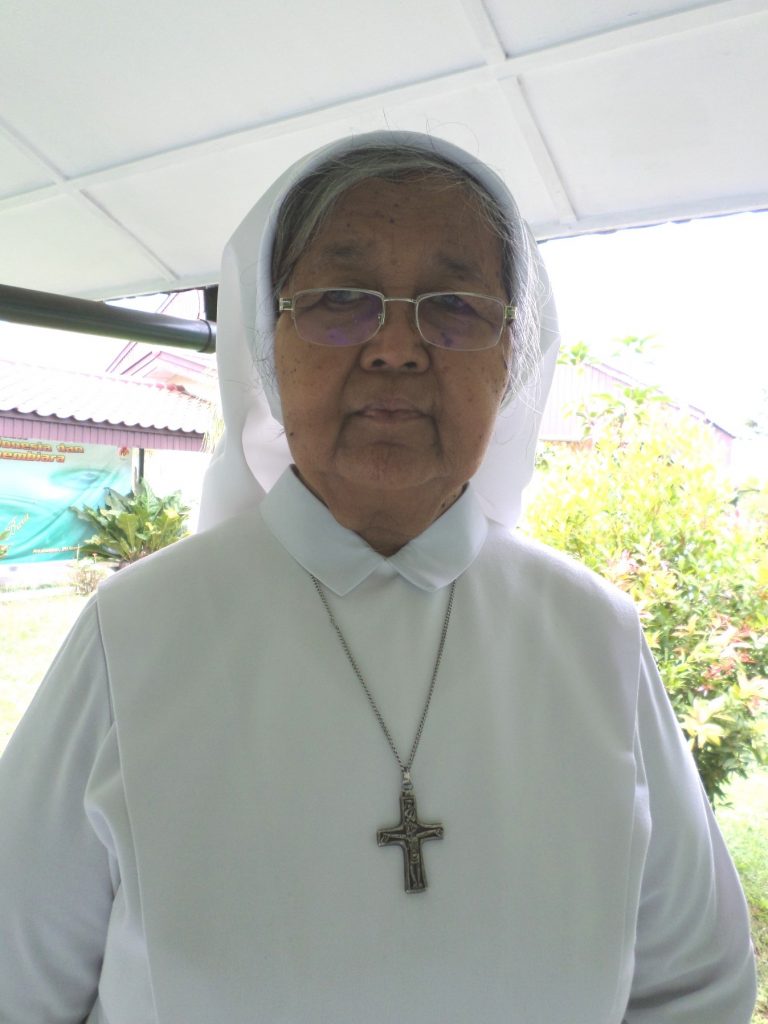 “True love flows out of the Sacred Heart of Jesus”.

Sister Maria Aloysia was the first child of a Muslim Family, Mr. Mardjo Kirin and Mrs. Kartini. She had two brothers and one sister. Mujiami was baptized on December 24, 1967 in St. Yosef Church, Blitar and received the Sacrament of Confirmation from Mgr. Y. Klooster, CM, on June 24, 1969.

Deep in her heart Mujiami heard God calling her to be a Religious. On April 21, 1980 she went to Pekalongan and joined the Congregation of SND as a postulant. On December 4, 1981, Mujiami was very happy to be allowed to make her investment and receive her religious name, Sister Maria Aloysia, SND.

During her formation, Sister M. Aloysia developed her love for religious life. She lived out her vows and made every effort to answer her vocation seriously. On November 13, 1983, she was allowed to make her temporary profession in Pekalongan. As a junior she was involved in various ministries. She made her final profession on June 27, 1990 in Rome.

Sr. M. Aloysia had a simple and gentle character as shown in her treatment of others, motherly care, and understanding. She always made the best effort to make others happy. In her task she was very responsible. She was ready to lend a hand whenever and wherever needed. She was always extremely grateful for anything one did for her or gave to her. “Thank you” with a sweet smile flowed easily from her lips. The Sacred Heart of Jesus was her great strength. She always had special time to pray the Rosary.

Sr. Maria Aloysia began her ministry in Marganingsih orphanage Lasem. She was full of attention and love for the children and they found a mother in her. Later on she ministered in the clinic of Rembang, in Santa Yulia clinic, Sukorejo, in Budi Rahayu Hospital Pekalongan, in Panti Wreda Melania Jakarta, in St. Mikael Seminary, Penfui Kupang, in Mejasem Tegal, in Palangka Raya Kalimantan and then back in Marganingsih Orphanage Lasem.

In 2017, as the condition of her health was not so good Sister M. Aloysia stayed in Pekalongan to have an intensive medical treatment in Budi Rahayu Hospital. Though not in good condition of health Sister still did her job in the sewing room zealously. She was hospitalized again and again and treated in the ICU several times.

Since 2019 Sister Maria Aloysia’s health had been declining. She continued to be hospitalized in Budi Rahayu Hospital again and again. On April 29, 2021 our good Lord called our dear Sister M. Aloysia to come to her eternal home in heaven where she would experience the true love that flows out of the Sacred Heart of Jesus. We miss you, dear Sister Maria Aloysia. We wish you eternal true happiness and peace, which our good Lord has prepared for you.