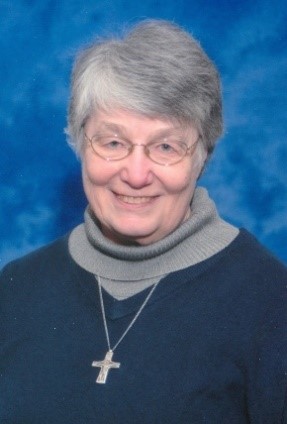 As Mary, Jesus’ mother, was busy about doing household tasks until she heard by an angel that her cousin was in need of her help, so Marcia, the second oldest of 16 children born to John and Gladys (Eckel) Destatte was busy helping with her siblings until she too heard a deeper call of God. It must have been difficult for her to leave her mother with the care of so many younger ones. But she, too, felt the joy in her heart and so knew the call was from God. Marcia attended St. Joseph Elementary School in Maumee, Ohio and then became an Aspirant attending Notre Dame Academy in Toledo.

Marcia was invested in August 1959, receiving the name Sister Mary Thadius but later changed her name back to her baptismal name.

Sister taught in elementary schools in Toledo, Fremont, Sandusky, and Delphos for six years before teaching Religion and English at the secondary level in high schools of the Toledo Diocese for 8 years. Sister was passionate about sharing her knowledge of theology and became the Director of Religious Education for 14 years at parishes in the Toledo Diocese.

In 1993 Sister Marcia Marie obtained her Licentiate in Canon Law at St. Paul University in Ontario, Canada and thus as a canon lawyer began her ministry as Director of the Marriage Tribunal Office for the Toledo Diocese for fourteen years where she initiated changes to establish a well-respected and efficient department.

In 1998 as a delegate to the General Chapter, Sister Marcia Marie was invigorated by the experience of the Chapter and sought out international experiences and sights in Rome whenever there was a chance. In 2001 as a member of the Commission for the Revision of the Constitutions, she again loved her experiences in Rome. Marcia thrived on learning, was interested in world affairs, and was widely read. This allowed her to hold her own in conversations that held depth and insight. She characterized herself as someone quiet of temperament and someone who liked to plumb the depths.

After battling cancer for several years, on June 27 during the Missioning Ceremony for the sisters of the Toledo Province, Sister Marcia Marie entered into eternal life in the 58th year of her religious profession. Thus she was missioned to her eternal dwelling. May she know the eternal embrace of the Good Shepherd.