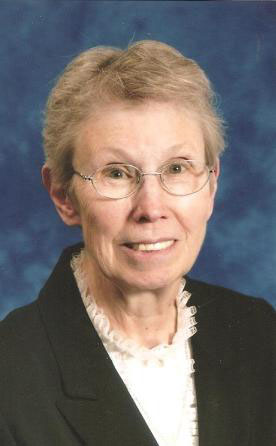 Born into the family of Odella Diroff and Raphael Iott on May 22, 1937, Lavonne was warmly welcomed by an older sister and was present when four more siblings later joined the growing family. Although Lavonne was born in Toledo, the family moved to Michigan when she was very young and it was there that she grew up and attended school. In 1951 Lavonne enrolled as a freshman at Notre Dame Academy in Toledo. It was here that she met and formed a lasting friendship with our deceased Sister Mary Dorena who motivated her to take interest in her studies, and awakened in her an attraction toward religious life.

In 1955 Lavonne entered the Sisters of Notre Dame and became known as Sister Mary Timothy. Later she returned to her baptismal name. Her younger sister Vivian followed Sister into the Community in 1958, taking the name Sister Mary Dorothee. She died of cancer in 1990.

Sister Lavonne Marie placed her many gifts at the service of others in varied ministries over her 55 years in religious life. She appreciated beauty and had a sense of color and arrangement that made the chapel a place where the sisters were drawn for quiet and prayer. She had a curious and logical mind and was a “problem solver” by nature. She was well read and had a memory that easily retained the content of her reading. In many ways she was a perfectionist taking pride in all that she did.

Sister Lavonne Marie spent fifteen years teaching middle grades in the schools of the Toledo Diocese where she loved teaching Math and was involved in various ministries of cooking, laundry, printing, and finances at Notre Dame Academy, Ladyfield, and the Provincial Center for thirty-two years. She also worked as a Home Health Aid for five years gently caring for the sick and elderly.

In 2002 Sister was diagnosed with leukemia. When other complications brought about a serious deterioration of her health it became necessary in February of 2013 to move Sister to Heartland of Waterville where her critical care needs could be met. In the late afternoon of June 11, at age 76, Sister Lavonne Marie breathed her life into the hands of her loving God. May she now experience the warm embrace of the good God who has eagerly awaited her homecoming.