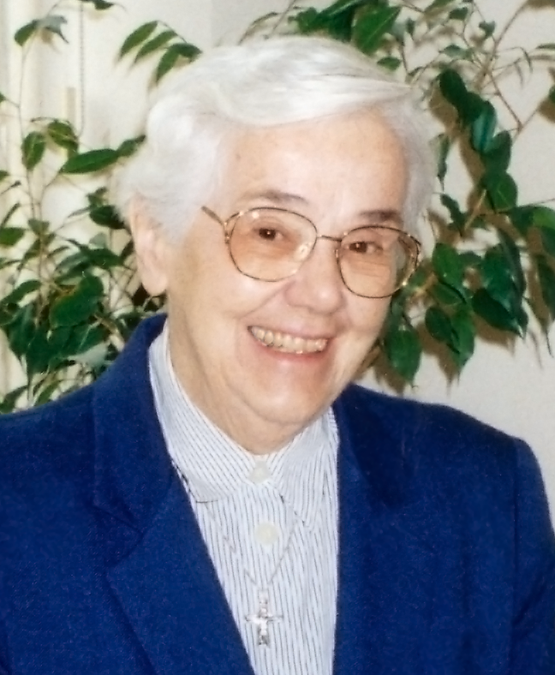 Elizabeth was the second of the six children born to Joseph and Marie (Faulhaber) Biebelhausen. For Betty, family was and always remained a precious gift to be treasured. Her family was a blessing and a source of great joy during growing up days of leisure, work, and play as care for anyone in need was fostered by her loving parents.

Betty and her older sister, Jane, attended Notre Dame Academy, Cleveland—an hour’s commute from their home. After graduation, Betty entered the Sisters of Notre Dame on September 8, 1944, partly because of the prayers of her great-aunt, Sister Mary Alferia Zurlinden of the Toledo province. At investment, she received the name Sister Mary Crucis. Later she returned to her baptismal name, Elizabeth Mary.

Sister Elizabeth Mary graduated from Notre Dame College, South Euclid, with a degree in home economics and began her career of teaching in the high school classroom. In 1954 Sister volunteered for the mission in India. The following year a late night phone call from Mother Mary Anselm gave her just a few days to prepare for departure. The voyage to India by freighter took almost a month. In this special call, she relied on God’s faithful love and was steadfast in her desire to minister with enthusiasm and creativity.

The ministries of Sister Elizabeth Mary during her years (40) in India only hint at all she accomplished, especially in Jamalpur and Patna. Sister served as treasurer, driver, in maintenance, social/pastoral worker, teacher, supervisor of kitchens and construction—she trained food service staffs, taught thousands of students and helped the mission foundation in India to grow into two flourishing provinces with its own mission in Africa. She even wrote her own cookbook, “You Can Cook, Too,” which is still in use!

Sister Elizabeth Mary returned to Chardon in 1995. Her missionary heart and experience in serving the poorest of the poor made her an integral part of the province Mission Office. In recent years, as Sister’s physical condition caused her to relinquish her personal independence, she often recommitted herself to the theme of her religious life: “God has not offered us a job to do in life. He has offered us a Covenant of Love to fulfil…even when all jobs fail.” She remained her own person, always a woman of deep prayer and hope. We are grateful for Sister’s untiring missionary heart and we thank God for the example of her faith and trust, her commitment and fidelity. May she live in the eternal embrace of our good and provident God.