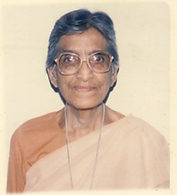 Sister Mary Shila (Casilda D’Mello) was born as the third of the six children of Timothy D’Mello and Helen D’Souza. She was baptized at the Sacred Heart Church, at Abadan in Iran, on November 3rd, 1929. Her Father was at the time in the service of the ‘Anglo Iranian Oil Company’ at Abadan. When Sister was three years old, the family returned to India and settled in Pune and her father took up service under the ‘Burma Shell Oil Company’ in Mumbai.

When Casilda was six years old, her Father was transferred to Calcutta, and she began her schooling at Loretto Convent, Dharamtala. In 1942, the family shifted back to Pune and Casilda was sent to the School run by the Sisters of Jesus and Mary. She passed her Matriculation in 1945 and then joined St. Mary’s Teacher Training School in Pune. However, for health reasons, she had to disrupt her studies mid-way and take a rest for two years and then complete her Teacher Training Course in 1949. Her fragile health, however, prevented her from taking up any teaching post till 1955. Then, she taught at Mount Carmel School for a year. During this period, she was greatly blessed to receive guidance and spiritual direction from Fr. Chemberlaine SJ, who helped her to discern her call to religious life.

In 1957, Casilda came to Jamalpur as a teacher to see whether her health would stand the climate and after that to make a decision about entering the Sisters of Notre Dame. Once the decision was made, Casilda never turned back. At her investment on December 8th, 1958, Sister was given the name Sister Mary Shila. At the end of her novitiate formation, Sister Mary Shila and her four companions made their vows on January 6, 1961, in the presence of Rt. Rev. A.F. Wildermuth, SJ, then Bishop of Patna. Sister made her tertianship at the Generalate in Rome with her companions, and made her Perpetual Profession on December 25th, 1965 in the presence of Mother Mary Anselm, the then Superior General.

Sister Mary Shila’s apostolic ministries were: college studies at Patna Women’s College (1966-1969); directress of the Juniors (1969-1972); local superior and headmistress of the Junior Section of De Nobili School, Dhanbad (1973-19’79) provincial secretary (1979-1982); superior of Sevashram and headmistress of Hartmann Primary School (1982-1983); English teacher of the candidates and novices in Jamalpur (1983-91); pastoral ministry at Sevashram (1991-1996); English teacher for the novices (1996-2006).and ‘prayer and presence’ in the provincial house infirmary (2006-2018). Sister Mary Shila’s health had been deteriorating since the beginning of this year. Fr. Devasia Chirayil, our parish priest, administered the last sacrament to Sister on March 17. Sister breathed her last peacefully and quietly at 1:50 p.m. on Thursday, March 22, 2018. Sister Mary Shila’s remains were interred at the provincial house cemetery, Patna, on Saturday, March 24, 2018. Sister Mary Shila’s gentle presence, her interest in every Sister of the province, her commitment to community life and her expressions of appreciation for any service done for her, will ever remain as fond memories for the Sisters.