“A Congregation which is not missionary dies inside” 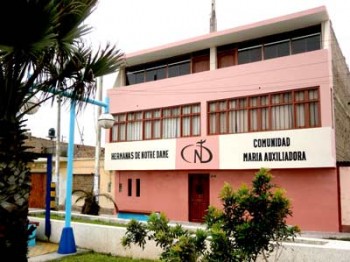 For many years a missionary project, “Ad Gentes”, in Latin America has been the dream of the Sisters of Our Lady of Aparecida Province in Canoas, Brazil. In February 2011, this missionary project was designed and sent to the Bishop of Trujillo, a city on the north coast of Peru. With about 750 thousand inhabitants, it is the major city of northern Peru and the capital of the department of La Libertad and of the province of Trujillo.

In May of 2011, on the occasion of a visit to Brazil, the provincial team presented to the superior general the decision to initiate a missionary project in Peru. The Superior General received the Sisters’ initiative with joy. This Project’s main purpose is the evangelization of the Church in Peru and at the same time the renewal of the missionary spirit in the Province. The sisters found a ministry in Children’s Pastoral and are spreading the ND values in another country of Latin America. Their activities include health care and the pastoral work among the poor, who are marginalized from the society. The Field of work is large.

Archbishop Héctor Miguel Cabrejos Vidarte, president of the Peruvian Bishops Conference said that the Province may send as many Sisters they have because there is much work to be done. The parish priest of Salaverry, Fr. Raymundo Alberto Claudio Delgado, said that he has been praying for ten years that his Parish would be blessed with Sisters. It was with great joy that he welcomed Sister Maria Roselaine, Sister Miriam Terezinha, and Sister Maria Loreni. This missionary project grew, and in 2014, became a mission “Ad Gentes”. In 2013, the first Peruvian young woman entered the novitiate, and made her first vows in 2015.

May Our Lady of Guadalupe, patroness of Latin America, accompany us and bless our presence in Peru.