International Formation Program in the Philippines

On April 8, 2013, eleven young women who desire to share our way of life as Sisters of Notre Dame began the new formation program in Iloilo City, Philippines. Accompanied by their directresses or superiors, three women from Indonesia, one from Papua New Guinea, four from South Korea, and three from Vietnam arrived in their new community, where they will live during their second year of postulancy. Each of them has been with the Sisters of Notre Dame in her own country for the first year of postulancy, gradually being introduced to religious life. In Iloilo, the first six months will be mainly dedicated to the intense study of English, followed by World History, Church History, Congregational History and basic catechesis, as well as the preparation for entrance into the novitiate.

After the arrival, the first hurdles of communication in a foreign language were quickly overcome with love and laughter along with everyone’s earnest efforts. Sister Marie Susanna and Sister Maria Yoanita, the sisters in charge of the formation program, prepared the house with much care. The postulants will share three bedrooms and take turns in cooking the meals for the group.

A special prayer service that marked the official beginning was shaped by the internationality of the group, asking the Holy Spirit for guidance and offering Marian hymns in different languages. May each one find peace and joy as she deepens her relationship with Jesus Christ. 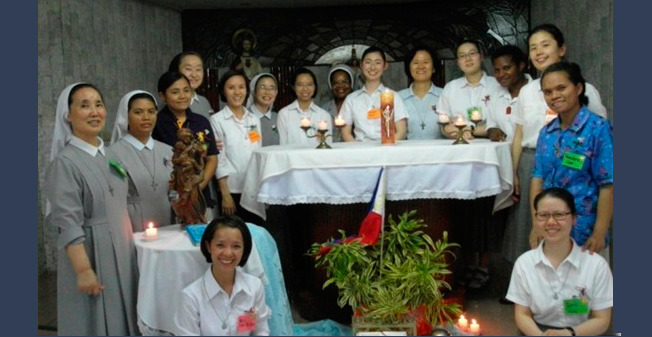