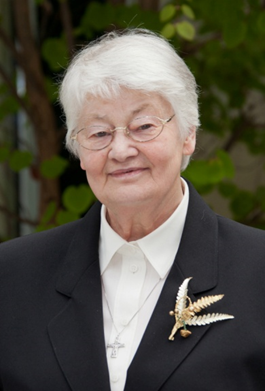 “Thou dost show me the path of life”.

This verse from psalm 16 accompanied Sister Mirjam for many years. The full verse reads, “Thou dost show me the path of life; in thy presence there is fullness of joy, in thy right hand are pleasures for evermore“. We believe that God has meanwhile bestowed on her this fullness of joy in abundance.

Josefa Balkenhol grew up in Bleiwäsche, a district of Fürstenberg, County Büren. She was the youngest of the four children born to Johannes Balkenhol and Maria née Hengsbach. Her father was a master blacksmith, who ran his own business. Unfortunately, he died already when Josefa was 16 years old. Her brother continued the business.

From 1945 – 1954, Josefa attended the basic primary and secondary school in Bleiwäsche. Then she assisted her mother with the housework after the untimely death of her father. In 1957, she came to Büren, where she gained some basic knowledge about housekeeping in the large kitchen of the Liebfrauenschule with the boarding school. So she was well prepared to work as a house helper in a family with five little children in Paderborn. After two years there, she returned to the Liebfrauenschule in Büren. First, she assisted in a small group of younger students at the boarding school. Then the reception desk was entrusted to her. Her reserved and at the same time friendly ways were good conditions for dealing with students, teachers, parents, and guests. At that time, the wish grew in her to join a religious congregation.

In May 1962, Josefa entered the Congregation of the Sisters of Notre Dame. She started her religious formation in the Liebfrauenburg in Coesfeld. At her investment in 1963, she received the name Sister Mirjam. That was a special joy for her because she had a great devotion for Mary, and the mother of Jesus was probably called by this Hebrew name, Mirjam.

The small retirement home Annenheim in Münster and the infirmary of the sisters in St. Michael in Ahlen were the first places where Sister Mirjam ministered. In 1970, she attended a specialist seminar for geriatric care in Aachen, because she loved working with the elderly. After the one-year professional internship, she received the state license. So she was well prepared for her ministry in the homes for elderly in Coesfeld, Gelsenkirchen, and Münster-Hiltrup. She also did a training in end-of-life care. The knowledge she gained there helped her to accompany dying residents in the retirement homes.

After professional retirement, Sister Mirjam moved to Kloster Annenthal in Coesfeld. Here, she assisted in the care units. She loved to accompany dying co-sisters. When her own physical strength decreased and hospitalization became necessary several times, she withdrew and was sometimes dependent on help for which she was very grateful. The walker became her constant companion. As far as it was possible for her, she loved going for a walk in the surrounding area. She enjoyed nature and short conversations with neighbors. She was also happy to have more time for prayer. God called her home very suddenly, but Sister Mirjam was certainly well prepared.

“Thou dost show me the path of life”. That was Sister Mirjam’s motto. God has accompanied her on her way through life and has led her to eternal life in His presence. May God give her the fullness of this life.