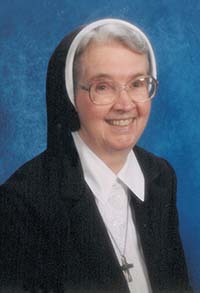 Sister Mary Wilma Ann was born on October 20, 1931 in Covington, Kentucky.  Theodore and Anna Wissmann, both from Germany, were blessed with five girls; Sister Mary Wilma Ann was the oldest. She attended St. Benedict Elementary School in Covington, KY and Notre Dame Academy.  There she became acquainted with the Sisters of Notre Dame.  She admired those Sisters who taught her and observed “that they were happy people and I thought that if they could be so happy in their religious vocation, so could I.” She entered the convent in her senior year and professed her first vows on August 8, 1951.

Sister Mary Wilma Ann was an educator who taught in several elementary schools in the Dioceses of Covington and Cincinnati.  In 1963, she trained in dietetics at Our Lady of Cincinnati College.  As a trained dietician, she ministered for several years at St. Claire Medical Center and St. Charles Nursing Home.

Sister had a particular interest in sewing.  Before her entrance she took sewing courses at a dressmaking school.  This talent served her well when later she had charge of the sewing room for the Province.  She was also an instructor in home economics and science at Notre Dame Academy for over 20 years. She found it challenging trying to inspire the students to believe in themselves.  Over the years she cherished the friendships that resulted from this apostolate and remained close to former staff members and their families.

It was Sister Mary Wilma Ann’s desire to further vocations to religious life.  In an article published in the “Catholic Telegraph” at the time of her Silver Jubilee, she encouraged others by stating, “Because of what I have found in the religious life, I dare to encourage other girls to follow… there can be no better way to spend your life.”  Another means for her of fostering vocations was serving on the Vocation Council of the Archdiocese of Cincinnati.  She also was a member of the Diocesan Pastoral Council of the Covington Diocese.

In 1988 Sister took up residence in the Provincial House.  For the next 13 years, she commuted to Notre Dame Academy where she was an instructor.  In 2001, Sister was given charge of the sewing room until her last illness.  About a year before her death she was diagnosed with amyotrophic lateral sclerosis (ALS).  This necessitated her moving to Lourdes Hall Care Center.  Although the disease caused her a gradual decline, Sister never lost her sense of humor and continued to be as independent as possible.

Family members were always welcomed by her.  She has two surviving sisters: Joan and Marge, a member of the Oldenburg Franciscans.  Several nieces kept in contact with her through the years.

During the night of May 11, when making their rounds the nurses discovered that Sister Mary Wilma Ann had slipped home to God.

May she live in joy and peace in God’s loving embrace for all eternity.