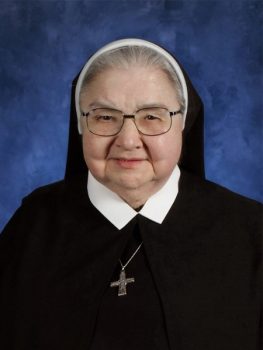 “All things are possible with God.”

A precious New Year’s Day gift from God was given to Michael and Mary Elizabeth (Fuchs) Gresko and their one-year old daughter, Agnes—the birth of Marianne Bernardine! The family soon moved from Pennsylvania to Cleveland and became members of St. Wendelin Parish where Agnes later became the church organist and Marianne, who was gifted with a beautiful voice, was a valued choir member. Mr. Gresko owned a grocery store where the girls had daily tasks for which they were responsible. Her parents’ deep faith, pride in their Slovak heritage and culture, and her participation in the parish youth group greatly influenced Marianne’s formative years. She admired the Sisters of Notre Dame, whom she loved and respected as her teachers in elementary school and at Notre Dame Academy. Attuned to God’s plan for her life, and with the permission and blessing of her parents, Marianne entered the community as a postulant on September 8, 1942; she graduated from the Academy the following June. At investment, she received the name Sister Mary Teresita.

The need for teachers was great, so as a second-year novice, and for the following ten years, Sister was missioned to teach intermediate and junior high students. Sister then earned a bachelor’s degree from Notre Dame College and a master’s degree in English from the University of Notre Dame, Indiana. Her ministry in education spanned more than fifty years. In 1969 Sister Mary Teresita was instrumental in the formation of Cleveland Central Catholic High School, a merger of four Catholic parish high schools, and became assistant to the director. The school operated on three campuses with students and teachers traveling by bus throughout the day for classes and activities. In 1972 Sister was missioned to Raleigh, North Carolina, where she served as principal of the re-opened Cardinal Gibbons High School. Wherever she ministered through the years, Sister directed choral and music groups in performances that delighted the audience and inspired confidence and a sense of community among the students.

Sister Mary Teresita received certification as a licensed professional counselor from John Carroll University and ministered in this capacity for eleven years at Regina High School. She loved the girls and considered it a privilege to help them look toward fulfilling their potential, especially through further education.

When she returned to the Provincial Center in 1998, Sister continued to be in ministry, assisting where needed—at switchboard, in the Archives, as transportation coordinator and at the Prayer Phone Line. She would say, “I love what I am doing and being!” Ever grateful for God’s faithfulness to her, Sister Mary Teresita exemplified strength of spirit even as her physical condition declined in recent months. She gave glory to God in her last years by a steady stream of  singing, humming and whistling as a constant prayer to her Beloved. May she rest in His presence.