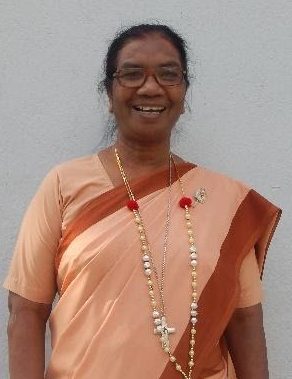 Prabha Lilly Toppo was the third child of Stanislas and Miriam Toppo. She had a sister and a brother elder to her and one brother younger to her. Prabha Toppo was baptized in the parish Church at Gholeng on July 6th, 1958. She grew up as a jolly and friendly child, very fond of singing.

Prabha started her education at the age of five at the Holy Cross Primary School, Gholeng. She was good in her studies and participated in co-curricular activities. She was elected School leader. After passing the Higher Secondary School, she wanted to join the Holy Cross Congregation. But her aunt suggested that she should join the Convent only after her College studies and some experience of life in the world. So, with the help of her parents, she completed her College and B.Ed. studies. She served as a teacher at the Ursuline High School, Jhingo for a few years. During that time her call to religious life became louder and clearer. With the help of a Jesuit priest, she contacted the Sisters of Notre Dame. Prabha joined the candidacy in Jamalpur on July 16, 1988.

In May 2019, Sister Mary Prabha was diagnosed with cancer at a rather advanced stage. In June Sister underwent a major surgery that lasted over four hours at Kurji Holy Family Hospital. Sister was in the ICU for 15 days and then shifted to a room for a week for close observation. She underwent 8 courses of chemo from July to December 2019. After further check-up, the doctors prescribed oral chemo for Sister as she was too weak to take more injections. During the first week of October 2020, Sister’s condition became serious again. She was re-admitted to Kurji Holy Family Hospital and was in the ICU and was on Oxygen and a liquid diet. On October 12th, the Doctors discharged her for home care. From then to December 1st the Sister-nurses and others took turns in being with her and caring for her. Even though Sister realized that her condition was critical, she hoped against hope that she would be healed. On December 5, 2020, Sister suffered what seemed to be a mild heart attack. She was rushed back to the hospital and into the ICU. On December 19 Sister Mary Prabha was moved to a room where the Sisters could be with her. Sister suffered intense pain. For a few days Sister Mary Prabha’s condition kept going up and down. She was often heard praying, “Jesus, Mary, Joseph take me home.” On December 24th in the morning, Sister Mary Nitya, our Infirmary in charge reported that Sister Mary Prabha Toppo was alert and showed appreciation for the Christmas decorations she had put up in the room.

Around 2:30 there was a sudden change in her condition. Sister Mary Tessy and a number of Sisters rushed to the hospital and prayed at her bed side. The end came very quietly and peacefully. At 4:50 pm. on Christmas Eve, Sister Mary Prabha breathed her last. A very touching wake service was held at the provincial house that evening. Eight members of Sister Mary Prabha Toppo’s family managed to make their way to Patna from Gholeng in spite of the Covid 19 restrictions. Our Sisters from Jamalpur and from the neighbouring communities were also present to bid farewell to dear Sister Mary Prabha. The funeral service was on Saturday, December 26th, in the Provincial House Chapel. Most Rev. William De Souza SJ, the Archbishop Emeritus, concelebrated the Thanksgiving Mass with a number of priests. The burial service took place immediately after the Holy Mass at the Provincial House Cemetery.

May Jesus, the incarnate God, in whose name Sister Mary Prabha taught and cared for the poor and the marginalized of His people, crown her with Eternal Glory!